BSNL Champion DM6513 is a 6.5 incher that’s priced quite generously

A phablet equipped with an HD display that can be yours for less that Rs 7,000 is the best way to describe the BSNL Champion DM6513 which has just been launched by the two companies in India. Available for purchase through a number of e-retail websites right now, its price has been set at Rs 6,999.

However, these sites still don’t think its low enough, which is why they’re offering the handset at even cheaper values. While Flipkart has it listed at Rs 5,990, Infibeam is selling it at Rs 5,884. Two listings on eBay are offering it at Rs 6,000 as well. The highlight of the BSNL Champion DM6513 is its 6.5-inch touchscreen monitor which offers an HD resolution of 1280 x 720 pixels. 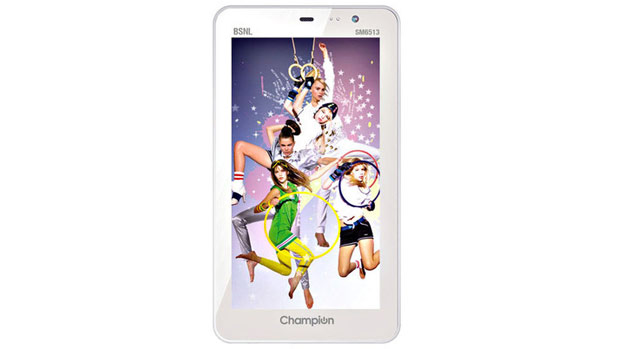 Equipped with the Android 4.2.2 Jelly Bean OS, it is powered by a dual core processor. 512MB worth of RAM makes its way into the phone, and while its internal storage memory is unknown, it is indeed expandable up to 32GB by means of a microSD card slot.

On the connectivity front, it supports 3G SIM WCDMA 2100 as well as Wi-Fi. And as far as imaging features are concerned, a 5MP rear camera and a 2MP webcam have been placed on it as well.

Like we said, the BSNL Champion DM6513 can be bought now at much lower values than its MRP. Head over to Flipkart, Infibeam or eBay if you wish to buy it.

Here’s a quick glance at its main specs: