Uh-oh, those fishy selfies you ‘deleted’ before selling your phone are recoverable

If you’ve ever sold an old smartphone, the first thing you’d do is wipe the memory clean or reset the device so that all of your personal information and files will be inaccessible by whoever owns it next. While this has been the standard practice for years, it apparently isn’t the safest as your content can still be recovered.

Hard as it’s to believe, the geniuses over at Avast have proof that your data is recoverable. Venture Beat notes that the company got its hands on 20 different Android devices via eBay which arrived clear of any data and yet managed to recover a lot of content including 40000 photos, 750 messages and 250 contacts. 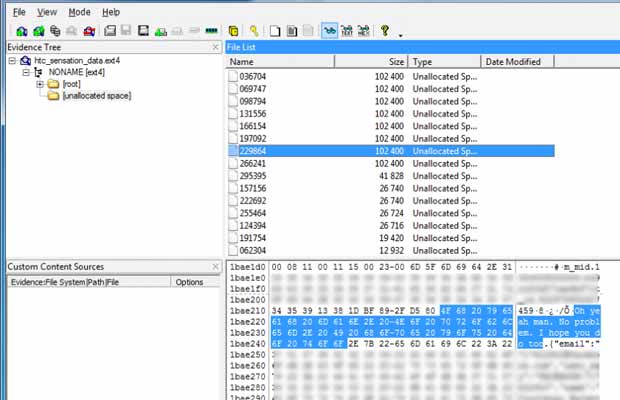 If you check out the image above, you’ll be able to see a Facebook chat being accessed as well. Apart from this, the security company has managed to get its hands on GPS location data, Google searches and a lot more. Here’s the most interesting part – One of the devices had security software installed to prevent data from getting in the wrong hands, but it turned out that the app gave out the most sensitive information.

Why is it that data can be accessed even after the drive has been wiped clean? We’re putting this in the simplest way possible – When you delete a file it disappears from the OS, but only the information which points to its location is gone. And while it shows that space has been freed up, the data is still present in the memory. On the upside, it’ll eventually be overwritten with new content, but that’s provided more content is added to the drive.

So here’s a small tip – Before you sell off any storage device including phones, tablets and laptops, first wipe everything clean and then fill the storage with redundant files so that the previous data is overwritten. This will prevent anyone from accessing your personal data. Head over to the Avast blog for more information on how the data was recovered and an in-depth look at their survey.

Facebook
Twitter
Pinterest
Linkedin
ReddIt
Tumblr
Flip
Previous article
Unique AT&T deal offers $50 worth of Play store credit with any Android phone or tablet
Next article
Nokia is coming back for round two with Project Crystal, but under Here brand