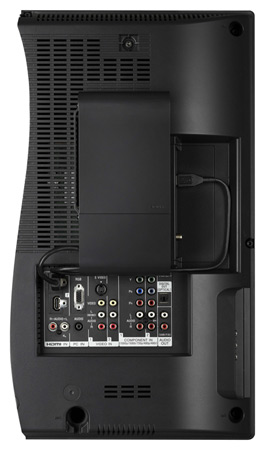 Everyone knows that broadband Internet video was a big hit in 2006, and now it has finally come to Sony televisions. Sony Electronics has launched the first of its kind TV feature called “BRAVIA” Internet Video Link that will allow most of its new televisions to access free Internet video content.

With the BRAVIA Internet Video Link, users will be able to access free Internet video content, including high-definition videos from providers such as AOL, Yahoo! and Grouper, as well as from Sony Pictures Entertainment and Sony BMG Music.

Sony’s new Internet video-ready televisions have the ability to receive streaming broadband video, via a small optional module that is easily attached and concealed behind the TV, giving it a very clean and integrated appearance.

The small optional module links the television set directly to a user’s broadband Internet service provider via an Ethernet connection. The video content can then be directly accessed on the TV without using a PC.

According to Stan Glasgow, president and chief operating officer of Sony Electronics, “This initiative will not only enhance the entertainment experience for owners of Sony Internet video-ready HDTVs, but also reinforce our defining strategy of providing more personalization of products and content for consumers that no other company can offer.”