Box, the cloud storage service has moved onto the next level and is all set to give some tough competition to Google Drive’s Docs with its all new venture called Box Notes. It is pretty similar to the search engine giant’s utility in terms of functionality and allows subscribers to create content and collaborate with others over the internet in real time. As of now, only the beta version of Notes has been released and those interested in trying it out can head over to the official website and register for it.

The company has tried to make its utility as social as possible and has included something called as note heads, which display profile pictures of people corresponding to their cursor positions. According to the developers, it makes Notes more collaborative. The program claims to bring multiple editing functions, but keeps them away from the screen unless you actually need them. For example, the inline toolbar appears only when a certain area is highlighted and stays hidden otherwise. Users can annotate documents and even comment alongside and the changes are visible to other users in real time. 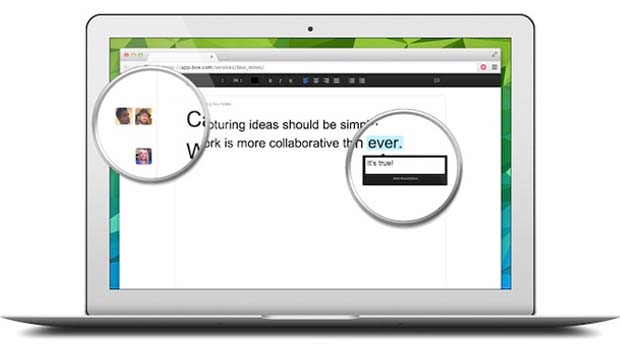 Sharing the notes created in the suite is hardly a difficult task. Documents saved in shared folders are automatically accessible to all of the collaborators in the group. And it goes without saying that if there are no members for a folder, the content remains private and is only visible to the creator. If the developers are to be believed, Notes is actually a combination of word processors and social communication applications.

Currently, the beta version of the Box Notes is available for users and the company wishes to make it available for a wide range of users in the coming weeks. Nothing has been mentioned about the global commercial roll out of the utility though.