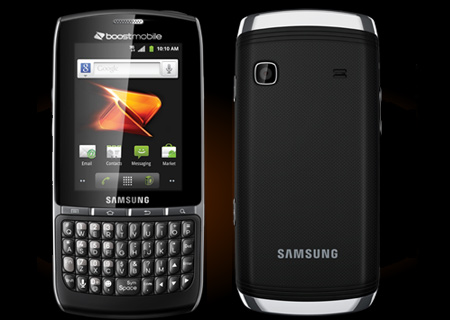 Keeping to the saying ‘sharing is caring’, Sprint seems to have started this new year somewhat on the generous side by lending the Samsung Replenish smartphone to its Boost Mobile subsidiary. This CDMA-enabled device is tagged as ‘Coming soon’ on the carrier’s website, but the official word points to a January 16 release date.

Flaunting a design that’s partially built from recycled plastic, the handset is said to be the first eco-friendly Android device from Boost. This variant is no different from the original provided by Sprint. Running the show here is the Gingerbread OS that’s accompanied by a number of features such as a 2.8-inch touchscreen, a QWERTY keypad, full access to the Android Market, GPS connectivity and a 2MP camera with video recording capabilities.

“Consumers are smarter about where and how their money is being spent, and Boost Mobile offers a considerable value. We offer first-class affordable Android smartphones, like the Samsung Replenish, on a reliable network with a no-contract offer that has payments that shrink over time,” stated, Andre Smith, vice president, Boost Mobile.

Available as a no-contract offer, this smartphone comes with the $55 Android Monthly Unlimited plan that gradually goes down by $5 after every six timely payments, until it reaches a $40 price. Boost Mobile has also launched its new Buyback Program in which potential users are entitled to account credits in exchange for their old devices.

The Boost Mobile Samsung Replenish price tag reads as $99.99 and it will be available through the carrier’s retail and online stores with free shipping as well as at a few wireless dealers in the U.S. It’s also expected to launch from national retailers by the end of the February.