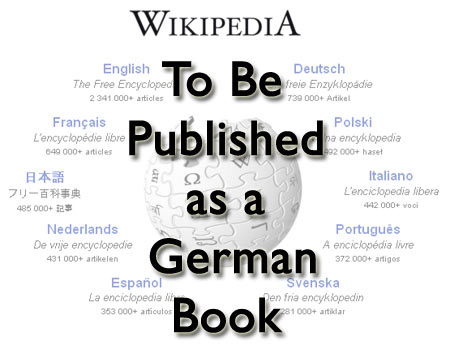 Wikipedia is soon going to be published as a book in Germany, for those who prefer turning pages. Publishing house Random House will publish the huge encyclopedia. The book will consist of over 50,000 of the most popular entries.

The German version of Wikipedia having 1,000-pages will go on sale in Germany in September 2008.

The book will be drawn on the Wikipedia community’s unconventional ideas of what knowledge people want. Therefore, the encyclopedia will have entries like Carla Bruni (the French first lady), PlayStation 3 and Donald Duck’s fellow characters.

Random House said that the entries to be made in the book will be selected on the basis of the most common terms searched by the 15 million monthly users of Wikipedia in Germany.

Beate Varnhorn, chief of the Bertelsmann Lexicography Institute said, “It’s a document of the zeitgeist.” Varnhorn further added that professional editors would check the facts and edit out inappropriate passages.

This book will be targeted at people referring to books rather than the internet and at people not having permanent internet connection.

The German Wikipedia is second in size to the English Wikipedia. It was once calculated that it would take at least 750 thick volumes to print all 2.3 million articles in the English-language version.