A few days ago, we saw the accidental leak of an app named Bolt appearing on the Instagram feeds of several users of the popular photo and video-sharing utility. It has now been released for Android and iOS platforms but the catch is that it is currently available only in a select few countries.

Bolt has seemingly been designed to cash in the quick-photo-sending trend started by Snapchat. It’s weird that Facebook which owns Instagram also released a similar app recently in the form of Slingshot. Anyway, Bolt has been blessed with a neat design and it’s looking to bank on the fact that it’s been built by the folks who’ve given us Instagram. 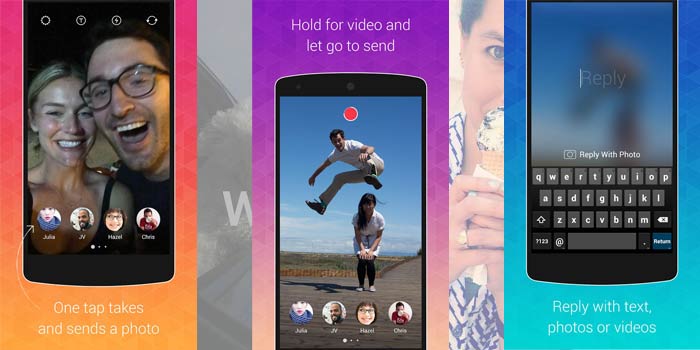 It has however received a soft release for now, as it’s only available in Singapore, South Africa and New Zealand. According to a statement its makers gave to Mashable, this has been done in order to ‘scale while maintaining a great experience.’ Other nations can expect to get this app soon.

Coming to the its features, this Snapchat rival allows you to send pictures to you Bolt contacts with just a single tap on their icons. So as soon as the application loads up, the camera will start running and display your favorite contacts at the bottom. All you need to do now is tap on one of them and they will receive the image that’s clicked right then.

If you’re not sure the image is right, you can shake the device quickly to cancel the sending process. And if you hold your tap for a longer time, a video will start being recorded which will get sent once you lift your finger. Swiping photos and videos away from your feed once you’ve seen them deletes them forever.