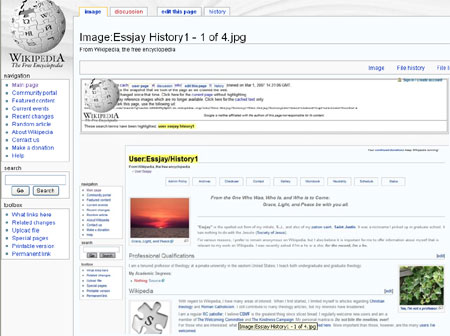 Popular free online encyclopedia is facing another crisis after one of its volunteer editors posed as a professor of religious studies from Kentucky and made thousands of alterations to controversial topics on the website.

The bogus editor known as Essjay on Wikipedia had the authority to arbitrate disputes between authors, and remove vandalism.

Essjay was actually Ryan Jordan, 24, who did not hold any advanced degrees. His real identify was reveled by New Yorker which ran a story highlighting the deception along with an interview with him titled “Know It All” published in the July 31, 2006 issue.

Initially Wikipedia co-founder Jimmy Wales said, “I regard it as a pseudonym and I don’t really have a problem with it.”

But due to intense scrutiny from bloggers and from Wikipedia members, Wales later asked Essjay to resign his positions. Shortly afterward, Wikipedia stewards, at Essjay’s request, deleted most of the content of his user page and removed his account’s administrative rights. Essjay also resigned from Wikia, Wales’s for-profit company. Reaction from within the Wikipedia community was sharp, but mixed with some fellow editors offering complete support while others accused Jordan of fraud.

As a result of the controversy, Wikipedia users began a review of Essjay’s previous edits and discovered evidence he flaunted his fictional professorship to influence editorial consideration of edits he made.

Ryan Jordan in his final post on Wikipedia said, “I’ve enjoyed my time here, and done much good work; my time, however, is over, and leaving is the best thing for me and for Wikipedia. I walk away happy to be free to go about other things. I hope others will refocus the energy they have spent the past few days in defending and denouncing me to make something here at Wikipedia better.”