Don’t get it mixed up, Boeing’s Black phone is not the same Geeksphone Blackphone for mere mortals like us who are worried about our messages, mails and internet activities being spied upon. Boeing’s device is targeted at the US defense and homeland security segments.

The Android-based gadget is built to self-destruct (in a manner of speaking) if anyone tries to open it. Quartz highlights one part of Boeing’s FCC filing for the Black which says that the phone’s casing and screw heads are coated in a substance called epoxy. 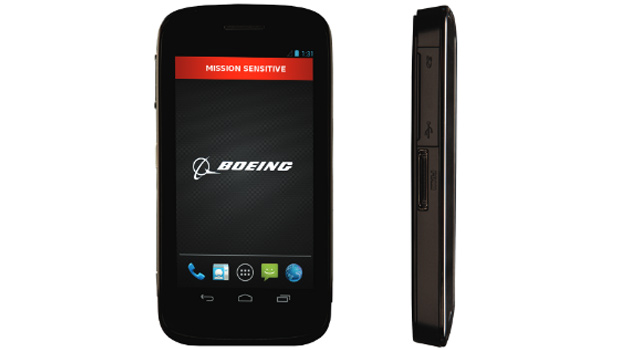 If anyone tries to tamper with the device with the intention of cracking it open, then it’ll set off a trigger and the data as well as software within it will be deleted. It might seem a bit off character for Boeing, one of the world’s largest aerospace and defense contractors, to be mucking around with smartphones.

But then again, BlackBerry is the only other challenger in the market for secure gadgets aimed at government use. Boeing could be looking to grab a huge share of the pie considering the Canadian brand’s dwindling popularity.

The Black is expected to accommodate GSM, LTE and WCDMA networks across the globe and feature dual SIM card slots. The manufacturer says the hardware details dodge Freedom of Information Act (FOIA) requests since they’re trade secrets and are crucial to national security.

Some of the Boeing Black phone specs: