As the Bluetrek Carbon Bluetooth headset sits still under our gaze in the review labs, we’re thinking of everything that has turned this moment into one positively tingly sense of anticipation. First off, the company has been flaunting the peripheral as the only Bluetooth headset crafted out of carbon fiber. The theme is ‘light weight’ so users eventually become unable to empathize with their fellow human beings suffering from that feeling of wanting to rip those heavy wireless earpieces out of their skulls. Honestly, the headset has been stirring up a lot of emotions ever since Bluetrek put it out that they had it on the drawing board.

It flew into our keyed up embrace in a transparent plastic packaging enveloping the pristine blue foam cradling it. Apart from the Carbon headset, the contents fitted into this soft protective casing included four earbuds of different sizes, a earhook, a removable pen clip, a microUSB cable for charging it up and a carrying case. We must not forget the accompanying user manual and booklet which insisted on talking about the safety approvals and certifications awarded to this peripheral, of course. The carrying case we mentioned is a sturdy black shaded enclosure which is spacious enough to fit in the headset and the supplied accessories. It wraps closed on magnets and feels like it could take a lot of pressure before allowing the occupants to suffer any harm. 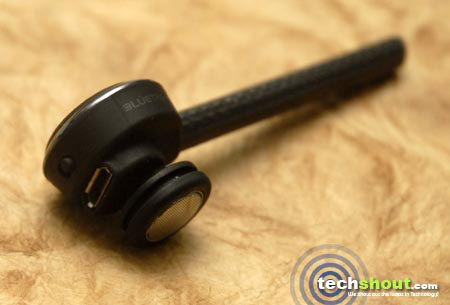 Coming to the Bluetrek Carbon headset, it flaunts a neat design that puts bulkier counterparts to shame not just because of the size, but also the lightweight build. The boom shows off gray and black interwoven lines all along its delightfully straight and skinny frame. The silver mic covering the lower end looks like it’s part of the artwork instead of actually serving any purpose. A microUSB port, a single button for tweaking the volume, an on/off switch and one main button are the only controls embedded onto the exterior. Its 0.27oz weight means you can have it hanging from an ear without worrying about it dropping out. And if the wind blows too hard, it’s still not going to get whipped out of your head thanks to the good grip. A slightly lower level of ambient noise is all that we experience in the ear from which the peripheral dangles. This device is a lesson in beauty and functionality right from the winsome earpiece to the shiny mic. 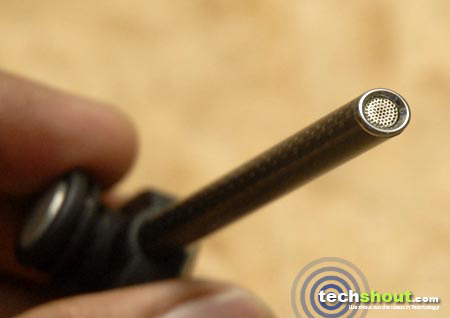 As soon as we turn on the Carbon, we’re prompted to choose a language for availing of voice instructions. These are served in English, Mandarin or Spanish. Pressing down on the main button for a few seconds sets the dual-color LED on the earpiece glowing alternatively in red and blue. Until we relent and obey the polite female voice keeps asking us to connect it with a gadget and cites the pin code as ‘0000’. It must have been a very long day for us, because after we spent a few minutes of acting like disobedient children, the voice seemed to be getting a little impatient. Did it turn into an admonishment and give up after five minutes of prompting? We can’t be sure. But we haven’t been pressed through the same phenomenon since then. All we know is that we’ve been feeling too contrite to test its patience again and simply link it up to our phones as soon as possible. 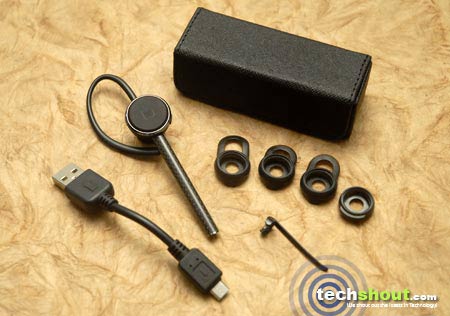 The multi-point technology delivers us the option of reveling in a three-way affair between the headset and two compatible devices. Picking up calls, cancelling calls or using voice command through the main button interface is simple enough once our fingers learn to appreciate the difference between long and short presses. The call clarity is first-rate even when we plant ourselves wearing the Carbon and the attached handset 15 feet apart. Pity it doesn’t handle levels though. We were immediately disconnected from the mobile phone sitting on our desk upon mounting three steps of a nearby staircase. The supplied earbuds are quite unnecessary, but they provide a snug fit for holes in the head of various diameters. After spending a few hours tinkering around with this scrawny, air-stopper for the ear we weren’t opposed to leave it dangling from the perch for longer. Bluetooth headsets swaying from one ear are naturally not our favorite choice for listening to music. Our hearts remained unchanged on this opinion when we were done listening to music interrupted by breaks and crackles. 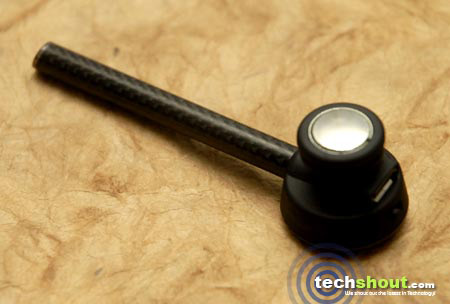 The Bluetrek Carbon is indeed light enough to hang from the side of your head solely on the strength of its earpiece. The company was not pulling one over everybody when they talked about a comfortably light build.

The controls are minimalistic and reasonably simple to use once you are initiated into the mysteries of long and short button presses.

The battery life and call voice clarity rendered by this Bluetooth v3.0 device are high points too.

You can do little else apart from making calls on the headset. Listening to music on it requires us to bear with annoying disturbances unless we’re clinging tightly to our phone.

Oh no, the Bluetrek Carbon headset isn’t getting an unusually heavy price label wrapped around it just because it’s attractive and light. The look is neat, part professional, part ‘chic noire’. A $69.99 tag has been tacked to it, which is somewhat at par with what headsets from companies like Jawbone or Plantronics are pegged at. The battery life is good for over four hours of usage and unless you’re listening to music, you can put a distance of up to 15 feet between the connected phone and peripheral without being troubled by voice clarity for calls. The headset’s being awarded a 9 out of 10 rating by us.