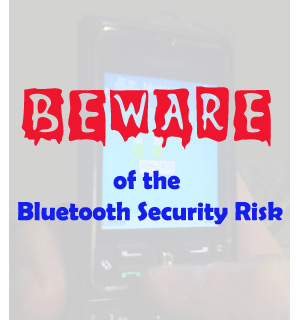 With everything’s “pros” come its “cons” too. The Bluetooth wireless feature is as common a feature in mobile phones, as perhaps what eyes and nose are to human facial features. And if you thought your Bluetooth function is absolutely safe, then think again!

Symantec has issued a warning that cautions users of the new impending dangers of using Bluetooth-enabled handsets. Apparently, users of such gizmos can fall victims to several attacks, such Bluejacking, BlueSnarfing and BlueBugging.

Amongst the above mentioned dangers, Bluejacking is being touted as the most annoying type of risk. Also called as “Bluespamming,” in this attack, its perpetrators send anonymous text messages to Bluetooth-enabled handsets.

However, the security giant did note that Bluespamming does have a low-level security risk.

Furthermore, Blusnarfing seems to be quite dangerous as it could allow attackers to sneak into an unfortunate user’s phone and scan through the data.

But the threat cake perhaps goes to Bluebugging, which according to Symantec is the biggest threat, where hackers can remotely control a handset while making calls without permission.