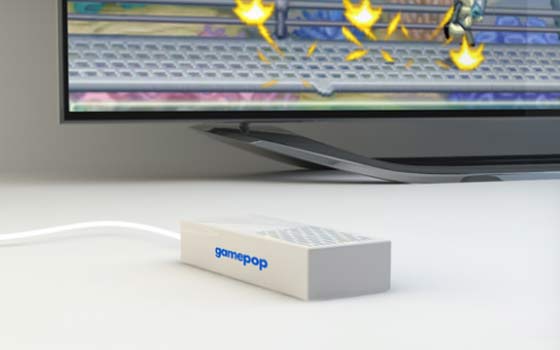 The BlueStacks GamePop Mini is as the name suggests, a compact version of the original gaming console which is currently available for pre-order. BlueStacks that’s also well known for its Android Player application, plans on offering this rig for free with a yearly subscription that’s pegged at a price of around $84.

So far, nothing concrete has been disclosed about the BlueStacks GamePop Mini apart from the fact that it will run on the Android Jelly Bean 4.2 platform like its larger sibling and can be connected to a TV via HDMI. The company has announced that console owners will be entitled to over $200 worth of paid games at absolutely no charge, that’s provided users have signed up for the $6.99 per month subscription.

The device will feature applications and games from over 500 popular partners. They include HalfBrick which has developed Fruit Ninja and Jetpack Joyride, Glu that’s well known for its Blood Brothers and kids app developer Intellijoy, amongst others. There are no hardware details out as yet for the console, but the company does note that games will run smoothly with performance at par, if not, faster than current high-end smartphones.

The BlueStacks Mini and its larger version will compete against various other Android gaming consoles like the Ouya, GameStick and MadCatz’s Project M.O.J.O amongst others. The first system on the list managed to gain quite a lot of publicity during its debut on Kickstarter. Where specifications are concerned, it features a quad core Tegra 3 processor, 1GB of RAM and 1080p HD video output.

The GamePop Mini is scheduled to go up for pre-order on July 1, with a release date promised for sometime this winter. The company is currently accepting reservations for the larger version with a limited time promotion where the console and controller can be picked up for free until June 30 with a yearly subscription. Once the offer ends, the rig will be available at a price of $129.