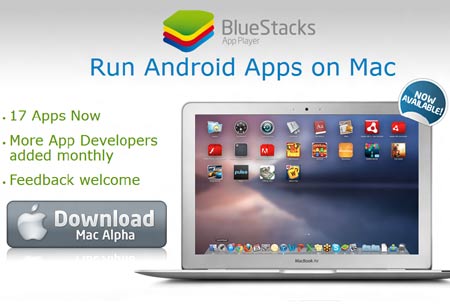 Currently in its public Alpha stage, the BlueStacks AppPlayer for Mac is now available for download. The software in question is the OS X-optimized version for systems running Apple’s desktop platform, which allows users to access Android applications on their computers and laptops.

To launch the app, the developer hosted an event dubbed the ‘Android & Mac Wedding’ outside Google I/O. Powered by the Layercake technology, this release packs in several preloaded applications from companies such as HandyGames, Creative Mobile and Pulse, while more additions are expected to arrive through the next release.

“Our PC version took off a lot faster than we had planned for. People are spending a lot of time on their smartphones and want the same experience on all devices,” commented BlueStacks CEO Rosen Sharma.” By bringing Android Apps to Mac we are breaking open the Apple ecosystem, which has traditionally been closed. Also, Android is struggling because of a lack of tablet applications. Developers now have an incentive to build hi‐res apps to work on the resolutions like retina displays on the new mac for example.”

The PC version which was launched back in March managed to hit the 1 million downloads mark in just about 9 days. The release allowed users to access around 450,000 Android applications on PC including graphically enriched games and demanding tools. This was capable through the hardware graphics acceleration the software employed.

The BlueStacks Android AppPlayer for Mac OS X systems is now available for download. Potential users can head over to the company’s website to acquire a free copy of the Alpha software.