Blu Products has announced its latest smartphone lineup which goes by the Studio C series and offers four highly affordable smartphones that delver KitKat on the cheap. The range comprises of the Studio 5.0 C HD, C mini, 5.0 C and 5.0 CE handsets with prices starting at $89 and going up to $149.

We’re starting off with the cheapest model that’s the $89 Blu Studio 5.0 CE. As the name suggests, this handset is a 5-inch one. The display offers FWVGA resolution and a 1.3GHz dual core MediaTek processor does the heavy lifting. The handset looks to be a great entry-level option, but the main downside is that it doesn’t have 3G support. 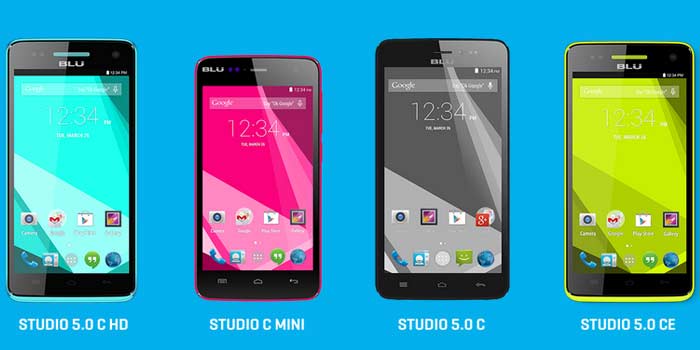 So, you’ll either have to depend on Wi-Fi for heavy browsing or deal with a painfully slow EDGE connection. Other features of the smartphone include an 1800mAh battery, 512MB of RAM, 4GB storage, 32GB microSD expandability, a 3.2MP rear camera and a VGA front snapper. Coming to the $109 Studio 5.0 C model, this handset is basically identical to the CE version, but it offers HSPA+ 21Mbps connectivity and a 5MP primary lens.

Also see: Nokia Lumia 530 is now available for just around $97, but only in China

Then we have the $119 Studio C mini that’s designed with a 4.7-inch WVGA display. The phone has the same memory provisions and connectivity radios as the 5-inch option. However, its specs have been bumped through a 1.3GHz quad core processor, a 5MP rear camera, a 2MP front snapper and a 2000mAh battery. The main handset in the roster is the 5.0 C HD that packs a 1080p screen for just $149.

The entire Blu Studio C series of smartphones is available in the US through Amazon and various other dealers.