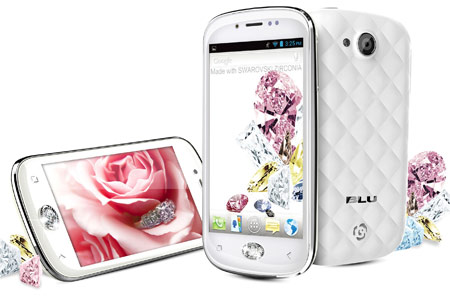 Move aside Lindy and Jenny, the Blu Amour is coming to the US. By the way, Jenny and Lindy actually are phones in Blu’s product portfolio. As for the latest announcement at hand, it takes the most ‘obvious’ approach to women’s hearts with a Swarovski zirconia home button decorating its face.

The Blu Amour is mostly white in color, except for the line of chrome framing its body. Its back panel is chipped out to show off a quilt-like pattern and painted over in pearl white. Though the company has clearly put its best efforts into making it look like a luxury device, we weren’t convinced even before seeing the label attached to it. The white exterior would have been nondescript if it wasn’t for the Swarovski zirconia home button.

And then the addition of the crystal shard only heightens the confusion as to whether the design appeals to at least a handful of people or not. But hey, here’s the answer – less people buying the Blu Amour means it’s going to be more of a rare sight and possibly mistaken for a luxury gadget. A win-win situation for the company and users? Enough about the shallower aspects of the smartphone for now.

The Blu Amour has a 4-inch IPS WVGA display with a curved glass touch panel. It gets its steam from a MediaTek MT6577 1GHz dual core Cortex A9 processor and unfortunately, Ice Cream Sandwich with no word about an upgrade in the future. The network compatibility has been mentioned as 3G HSDPA 7.2Mbps 850/1900 and GSM/GPRS/EDGE 850/900/1900/1900MHz. It also delivers the usual features like Bluetooth, Wi-Fi and GPS.

A 5MP camera with LED flash is present on the rear panel for those who are keen on investigating its basic photography capabilities. There’s also a VGA lens above the touchscreen. The phone is powered by 512MB of RAM and 4GB of internal memory is provided for storage needs. Additionally, there’s a microSD slot which can take a card of up to 32GB. All of this technology is fitted into a 128.5mm x 65.5mm x 11.6mm body powered by a 1600mAh battery.

The Amour was on display at the JCK Las Vegas Show, a jewelry event which wraps up today. It has commenced shipping already and will be available through online vendors like Amazon. The price for this Swarovski-studded chunk of Android? An unexpectedly low $159 tag.