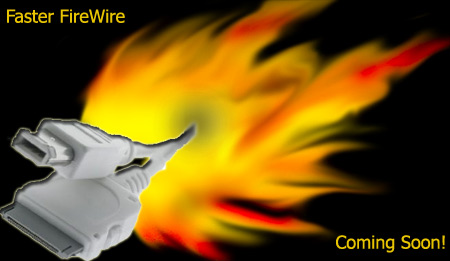 The IEEE 1934 Trade Association has announced a newer and faster FireWire standard known as the FireWire S3200. It is said to achieve up to 3.2GBps transfer rate and at the same time maintains backward compatibility with FireWire 800 (IEEE 1394b) and FireWire 400.

According to James Snider, executive director, 1394 Trade Association, “The S3200 standard will sustain the position of IEEE 1394 as the absolute performance leader in multi-purpose I/O ports for consumer applications in computer and CE devices.”

“There is a very clear migration path from 800 Megabits/second to 3.2 Gigabits/second, with no need for modifications to the standard and no requirement for new cables or connectors,” added Snider.

For those who are unaware, a FireWire is a cheaper design compared to the much used USB. Even though USB2.0 is thought to be fast, in actual fact, it has slower sustained transfer speeds than FireWire 400.

Moreover, FireWire is able to supply much more power through its interface, eliminating the need for AC adapters in numerous applications.

The upcoming FireWire S3200 specification is slated to be ratified only by early February 2008.
Moreover, the IEEE 1934 Trade Association claims that alternative cable options to carry FireWire over long distances such as up to 100 meters or more, will also be available.