BlackBerry has introduced its second all-touch smartphone, the Z30, running on the latest BB10 platform. After months of speculation, the device is now official and as expected, it’s the largest handset to arrive from the Canadian company. What’s more, it’s also the most powerful addition to the lineup carrying a dual core processor and quad core graphics.

The Z30 was initially known as the A10 Aristo. Previous rumors have been spot on with the details. The smartphone sports a 5-inch Super AMOLED HD display and it’s powered by a 1.7GHz Snapdragon S4 Pro CPU with Adreno 320 graphics. With a bigger size, comes a larger battery, which according to the company, is capable of delivering up to 25 hours of activity on mixed usage. The BlackBerry Z30 is also designed to entertain. It sports the Natural Sound technology which delivers high quality audio via the built-in stereo speakers. There’s a ‘new generation’ antenna technology onboard as well, that’s said to provide better reception in low signal areas and also enhanced data rates with lesser chances of calls getting dropped. 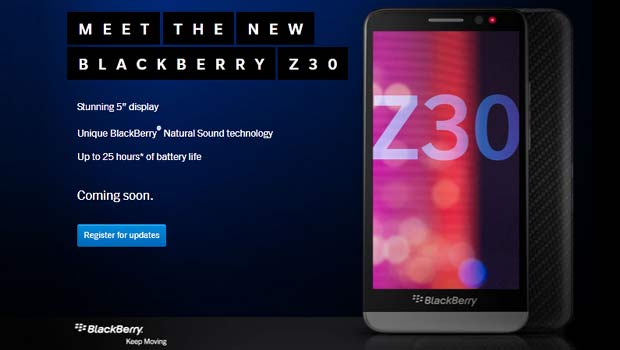 BB 10.2 runs the show here and it features various improvements and fresh attributes. First up is the Priority Hub which displays conversations and notifications. This tool is capable of instantly delivering important conversations based on what content is significant and by prioritizing messages from emails, social networks and more affiliated accounts. BBM has been given the ability to display a new IM in any application. You’ll have the option to reply or dismiss the message without leaving what you are doing.

The BlackBerry Z30 will go on sale in the UK and the Middle East next week followed by other locations this holiday season. The 10.2 OS will be available for the Z10 (review link), Q10 and Q5 (review link), smartphones as an update mid-October.