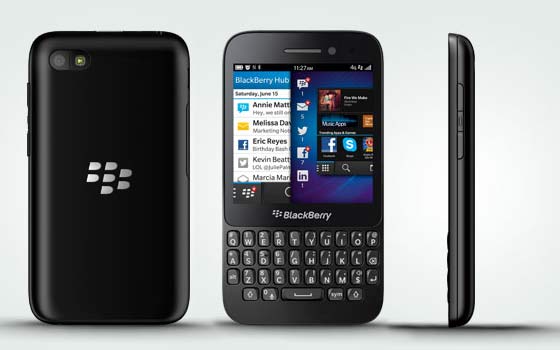 The BlackBerry Q5 has gone on sale in select locations around the globe and it’s expected to arrive in India soon. The 2 top-tier BlackBerry smartphones, namely the Q10 and Z10 (read our review), have already hit availability status with the latest OS carrying price tags of Rs 44,900 and Rs 42,490, respectively.

The device’s arrival in the country was confirmed by the company’s Twitter account in response to a query. No specific details or the price were provided apart from ‘coming soon.’ The BlackBerry Q5 is the third in the BB10 series and the second to arrive with a QWERTY keyboard. Unlike the Q10 which has a premium form factor, the handset in question is classified in the mid range bearing a Curve-like design.

The BlackBerry Q5 will sport various features found in the Q10. To sum everything up in a nutshell, the device comes with a 1.2GHz dual core Qualcomm Snapdragon MSM8960 processor, backed by 2GB of RAM and a Li-ion 2180mAh battery. The front flaunts a 3.1-inch 720 x 720p screen as well, while the rear is fitted with a 5MP camera and an LED flash.

Currently, the BlackBerry Q5 is available for purchase in the UK via various retail outlets like Clove, Phones4u and Carphone Warehouse amongst others, as well as carriers. The unlocked version can be grabbed for £319.95 and above, while the SIM locked variants can be picked up for free on contract with monthly payments starting at £21.

There’s no telling when the Q5 will be launched in the country. But considering that it’s an important market for the Canadian manufacturer, we’re won’t be surprised if the device lands up in stores overnight. Speaking of which, those who find the Q10 expensive and are patiently awaiting the smartphone’s launch should take a look at eBay.in where a few sellers have started offering the phone for a price of Rs 30,000 and above, which is over Rs 10,000 lesser than the two high-end models.