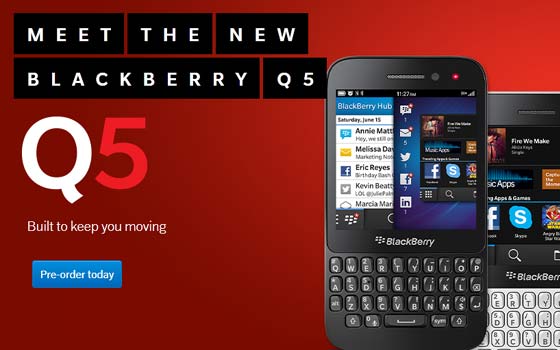 The third BB10 smartphone, the BlackBerry Q5, is scheduled for launch in India tomorrow and it will arrive touting a traditional QWERTY keyboard and an affordable retail tag. The device is also the second in current lineup from BlackBerry to employ a physical keypad instead of a full touch form factor.

We’ve been anticipating the launch of the BlackBerry Q5 for quite some time now. Just last week, the company’s country-specific Twitter account noted that the device will be coming soon, but no specific date or time-frame was given for release. A few days later, we even spotted the phone listed on a few retailers which suggested that the its official launch wasn’t far off.

One of the main highlights of the BlackBerry Q5 is that is encompasses most features found on the Q10 and delivers them at a budget-minded amount, which should play well amongst BB fans longing to get a taste of the latest platform. On the downside, the BlackBerry Q5 seem to have a less premium design, more the Curve series against the Bold in appearance.

Let’s take a quick look at the specifications. The smartphone carries a 3.1-inch touchscreen with a 720 x 720p resolution and a 4-row QWERTY keyboard on the front. Flip over to the rear and buyers will be presented with a 5MP AF camera. On the inside, there’s a 1.2GHz Qualcomm Snapdragon S4 processor, 2GB of RAM and 8GB of storage amongst others.

The Q5 is expected to go on sale in the country soon after its launch tomorrow for a price that’s below Rs 30,000 which makes it over Rs 10,000 cheaper than the Q10 and Z10 (read our review) handsets. The device is currently available through eBay.