BlackBerry Porsche Design P’9983 is lavish on the outside, but mid-range inside

After months of speculation, the BlackBerry Porsche Design P’9983 is finally upon us and it looks better than what leaked images have been portraying so far. The smartphone is the successor to the P’9982 all-touch smartphone and it is the third collaboration between the two companies.

The BlackBerry Porsche Design P’9983 is the first QWERTY phone in the series to run on the BB10 OS and it comes with the latest version 10.3 platform preloaded. The phone is crafted from premium materials where the rear panel flaunts a special glass-weave look, while the camera lens is made from sapphire glass. 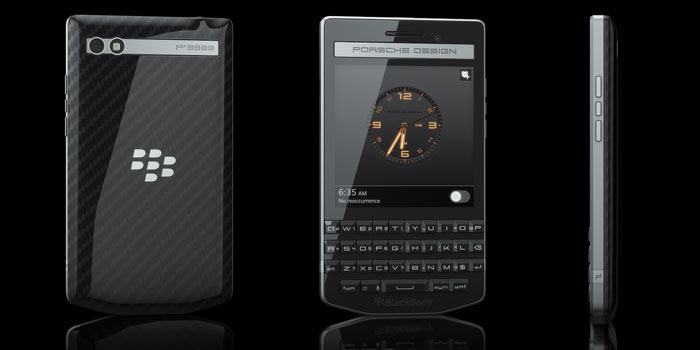 And the Porsche Design logos you spot on the front and back are crafted from stainless steel. There’s no word on what’s protecting the display, but the QWERTY keyboard on the bottom has glass-like buttons for more durability and they give out a 3D effect with silver font characters.

Attractive as it is on the outside, the phone packs some pretty decent specs. The display here is 3.1 inches wide with 720 x 720 pixel resolution. The front camera is of 2MP, while the rear one is an 8MP shooter. On the inside, there’s a 2100mAh battery, 2GB RAM, 64GB storage and 128GB microSD expandability. The biggest downside is the 1.5GHz dual core Qualcomm MSM8960 processor which is the outdated Snapdragon S4 Plus SOC.

Unfortunately, BlackBerry has its lips sealed about the price for the Porsche Design P’9983. Previous reports suggested that the phone should retail for around $2000.