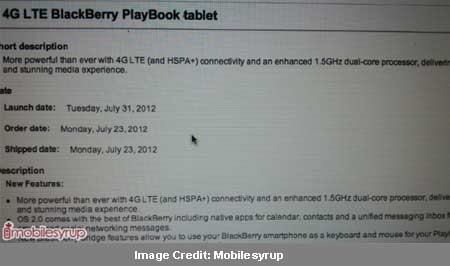 More than a year after announcing the BlackBerry PlayBook 4G LTE tablet, RIM seems to have decided to go ahead and launch it. A leaked document has showed up that divulges not only the price of the device, but also the exact release date, which is July 31.

According to MobileSyrup, the tablet’s leaked images kept surfacing on the web ever since it was unveiled at the MWC last year. And the most recent speculation about the device in question reveals that it is set to be made available in Canada towards the end of this month. The aforementioned website also reports that the 4G LTE-enabled slate will initially be released through Bell. The leaked document that reveals the upcoming availability of this version of the PlayBook happens to be from Bell itself.

Similar to the previously launched BlackBerry slab, the new version is also expected to flaunt a multi-touch display that spans across 7 inches. It should render clear visuals in a 1024 x 600p resolution. Compatible with 4G LTE as well as HSPA+ networks, it acquires multitasking properties from a dual core chipset that can process at a maximum speed of 1.5GHz. The upcoming version of the PlayBook is apparently powered by the OS 2.0 and takes on multiple demanding tasks, thanks to 1GB RAM. 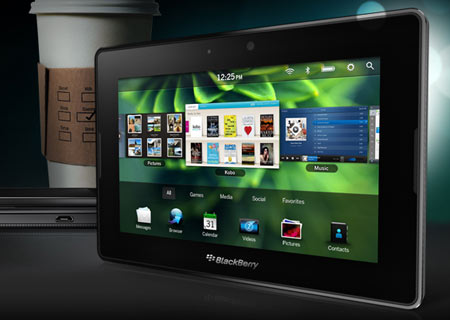 The tablet with dimensions of 130 x 193 x 9.7 millimeters, tips the scale at 245 grams. The rear-facing 5MP camera is said to be capable of recording 1080p HD videos, apart from capturing still shots and a 3MP front-mounted webcam facilitates video conferencing on the move. The slate draws power from a 4800mAh battery and unlike its predecessor, will only be available with the 32GB onboard memory.