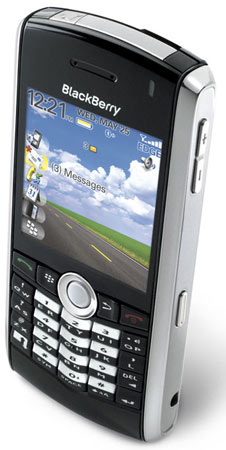 The feature-rich smartphone incorporates the best technology and is a quad-band GSM/GPRS and EDGE-enabled mobile application powerhouse.

The built-in 64MB flash memory of the BlackBerry Pearl 8100 is now expandable with a MicroSD card. Thus users will have plenty of storage space for music, pictures, videos and data files.

Other brilliant features of the BlackBerry Pearl 8100 include intuitive call management features such as smart dialing, conference calling, speed dialing and call forwarding. The Blackberry Pearl 8100 also features a speakerphone, Bluetooth 2.0, car kits and other Bluetooth peripherals such as a GPS receiver.

“We are definitely trying to reach out to broader segments of the market. It (BlackBerry) is fundamentally a strong business tool. We have listened to the customers and with the Pearl, we are taking a giant leap forward in meeting customer demands,” Norm Lo, Asia-Pacific vice-president of RIM said. “We have a great relationship with Bharti. With Bharti, we have seen the demand accelerating and we are bullish because there is an organic growth here which will take business up multi-fold. That is why we are launching it first in India,” he said.

Sanjay Kapoor, joint president (mobility), Bharti, said, “The new device takes away the need to carry two phones — one for data applications and the other for voice needs. The Pearl allows you to amalgamate voice and data applications into one.”

The BlackBerry Pearl 8100 will be out in stores all over India in the next two to three weeks and will be priced at Rs. 24,999.