Passport and Classic, the innovative new offerings from BlackBerry are all set to be doled out in the US by AT&T on its trusted LTE network from February 20 onwards. Both these smartphones have been designed with the aim of offering the vintage BB experience on modern hardware.

The BlackBerry Passport has been slightly customized by AT&T to add its own touch to its design. No we’re just not talking about the carrier’s logo which sits on its rear surface; we’re in fact referring to the rounded edges which the AT&T device has been blessed with, as opposed to the pointy ones that are part of the original model. The Classic’s design has not been tampered with however. 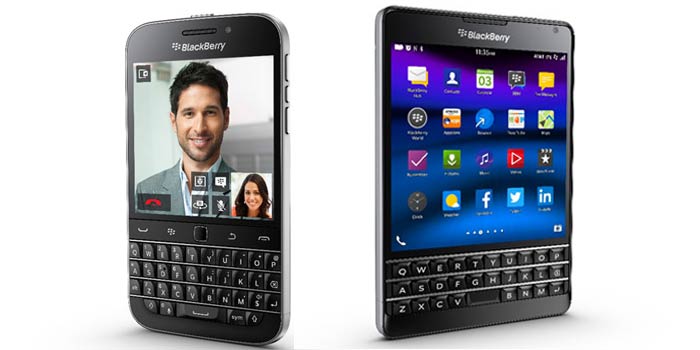 The BlackBerry Passport which has been designed to look like a usual passport, has been blessed with a 4.5-inch display bearing a resolution of 1440 x 1440 pixels. There’s a quad core Snapdragon 801 processor onboard the device, apart from 3GB worth of RAM. A 13MP rear camera and a 2MP front snapper are two of its other highlights.

Just like the Passport, the Classic too features the combination of a touchscreen and a physical keyboard. Staying true to its name, this phone even brings with it the familiar navigation keys which formed part of old BlackBerry handsets. A 3.5-inch display, a dual core Snapdragon CPU, 2GB of RAM, an 8MP rear camera and a 2MP front snapper are some of its key specifications.

Like we said, February 20 is when the BlackBerry Passport and Classic devices will officially be made available by AT&T in the US.