T-Mobile is putting a lot of focus on BlackBerry customers and its latest promotion wants them to switch to Samsung for a sweet $200 gift card. Apart from this, the carrier announced that it would offer $100 to BB users on its network upgrading to a new smartphone including ones from the Canadian company.

The latest promotion was brought to light by TMO News where one of their readers received a text from T-Mobile with the offer details. The up to $200 credit can be acquired only on specific Samsung smartphones. They include the Galaxy Note 3, the Galaxy S5 flagship and the Galaxy Lite. The promotion also applies to customers on JUMP!. 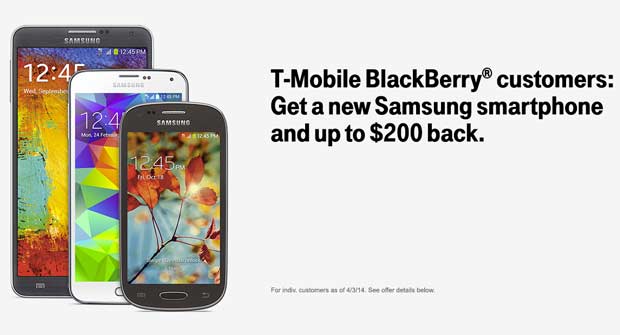 What’s interesting is that the carrier hasn’t officially disclosed the existence of the promotion and the fine print on the offer page highlights that it went live over a week back on April 4. As you probably know, the Canadian giant has ended its agreement with the magenta carrier in the US. This basically means that T-Mobile isn’t going to be selling any new BlackBerry devices in the future. However, the carrier will support phones on its network and will continue to accept new customers that bring over BlackBerry handsets.

The latest promo from T-Mobile is a great deal if you’re looking to upgrade to a new high-end device like the Note 3 and S5. If you’re not keen on getting a Samsung phone with a gift card of up to $200, you could go for a newer BB10 handset with a $100 discount or any other phone offered by the carrier.