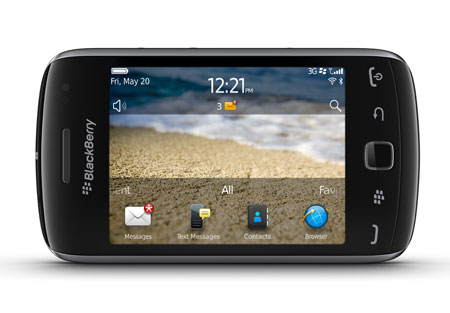 The all-touch BlackBerry Curve 9380 recently landed at our review lab and saying that we’re just eager to whirl around its offerings is quite the understatement. RIM seems to be going out on a limb here, by adding a little extra ‘touch’ to most devices it launches nowadays. Well, the company’s efforts certainly haven’t gone in vain. The handset in question is the first smartphone in the Curve family to come equipped with a touch-enabled display. And unlike the Bold 9900 as well as the Bold 9790, this offering has even dropped the traditional QWERTY keyboard, placing it as a cheaper alternative to the latest Torch offerings. As the saying goes, ‘there’s always a first to everything,’ the question hovering around in our heads is – has RIM done enough with the 9380 to make it appealing to fans? Well, that’s what we intend to find out.

On the components front, the Canada-based telecommunications company has equipped its smartphone with an applaud-worthy set of hardware. Powering up the Curve 9380 is a 1,230mAh rechargeable lithium-ion battery. Hidden within its 11.2mm chassis is an 806MHz processor that’s backed by 512MB of DDR SRAM and 512MB eMMC storage. At 3.2-inches wide, the 24-bit color TFT LCD portrays HVGA+ resolutions of 480 x 360 pixels at 188ppi. Besides Wi-Fi 802.11 b/g/n, Direct IP web browsing and A-GPS support, the handset employs the NFC technology as well. There’s also a 5MP camera that’s accompanied by a LED flash and features such as face detection, image stabilization, geo-tagging and VGA recording amongst various others. 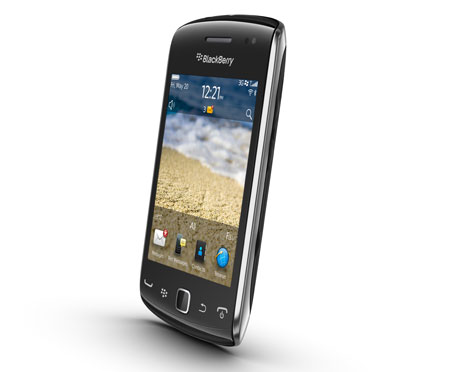 The formula used to craft this all-touch BlackBerry Curve 9380 handset is pretty much simple. Apart from the 3.2-inch touchscreen and the omission of the QWERTY keyboard, it looks no different from most BlackBerry smartphones. It’s usually said that the Bold series gets more of the premium treatment. Well, this offering might just be an exception to that. The device comes with the same smooth finish and the hard-plastic silver bezel we’ve previously seen on the Bold 9790. To sum it up in a single line – the smartphone measures 109mm x 60mm x 11.2mm in dimensions and flaunts a stylish form factor with aesthetics that make it an even more alluring pick. A single frame encompasses the touchscreen along with the 4 physical buttons and the optical trackpad on the bottom, as well as the headset and the LED notification just above the display.

The frame further spreads to the extreme upper end until its hits the bezel and also takes the 3.5mm headphone jack and the lock/unlock button under its grasp. We were presented with the 5MP camera and LED flash that’s separated by the ‘Curve’ branding on the rear as well as a loudspeaker just below the battery case. The microUSB port can be found on the left panel, whilst the volume controls, the play/pause button and the user configurable key are located on the right. What we really liked about the touchscreen is that it isn’t quite the smudge-friendly type. And although it does attract a fair amount of finger grease, stain marks aren’t really that noticeable. What we would like to know is – why would a manufacturer classify a device as ‘all-touch’ when the physical buttons are clearly visible? Well, it’s admissible if the 4 push keys were of the capacitive-touch type; but RIM really needed to find a better way to advertise the BlackBerry Curve 9380 handset. 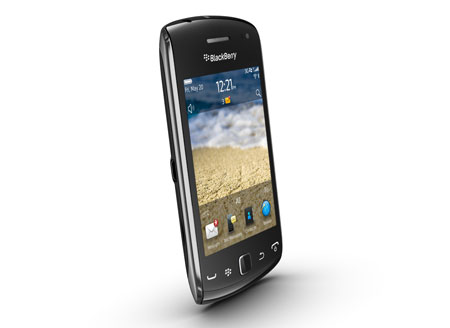 The BlackBerry 7 OS software employed is what makes the handset a worthy pick. If you were to compare the current UI with the previous version, it’s highly similar to the BlackBerry 6 OS as nothing much has changed visually besides a few enhancements and features. To keep it short, the interface has a clean appearance and is intuitive to use with everything available at the forefront. The transparency in menus and landscape orientation support only makes it more alluring. The touchscreen places itself as a more apt selection for accessing features and navigating through menus. Amongst the platform’s many offerings, the web-kit browser is apparently the best enhancement we could find. Not only were we able to access complete websites, but also HTML5 content and various streaming media. While the touchscreen provides the convenience of navigation, the optical trackpad allows you to move the cursor around to select links and perform other operations.

On the entertainment front, the music player brings in touch support. This means you can flip through tracks by simply swiping across the screen instead of going back to any list. And the pre-built Music Store makes it easy to purchase songs straight on the phone. The audio quality is good enough to keep audiophiles well satisfied and video playback is smooth and clear on the HVGA+ color display. Well the Blackberry Curve 9380 is a real entertainer, but clearly not much of a photographer. The images we snapped up appeared blurry and washed out. To be frank, we weren’t expecting much from the handset’s video recording capabilities. However, for a VGA standard camera, the footage quality was above what we anticipated. With moderate usage including web browsing and video streaming over Wi-Fi as well as casual gaming and listening to music, you’re basically looking at 5 to 6 hours of battery life.

Although RIM has dropped the QWERTY keyboard from the handset’s blueprints, the virtual one makes inputting text as intuitive and swift as using the former.

The 3.2-inch touchscreen is quite responsive and even at a 480 x 360 pixel resolution, videos and images present themselves clearly and crisply.

When RIM says all-touch, they seem to have forgotten to take the physical buttons at the bottom into consideration.

From booting up the smartphone to accessing certain features, the Curve 9380 was terribly slow and got unresponsive at times.

For the price tag the handset holds, we were at least hoping for a better quality camera.

Besides the usual pinch-to-zoom controls and various others, the addition of more gestures could make a smartphone like the Curve 9380 even better.

Taking into account our entire experience with the handset, the BlackBerry Curve 9380 delivered a fun and enjoyable ride and places itself as a viable alternative to the pricey Torch series. But it’s about time the Curve range received some major improvements. Available at Rs. 20,990 in India, we’re giving this offering an 8 out of 10 rating.