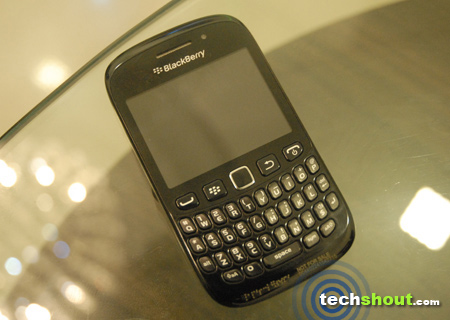 The BlackBerry Curve 9220, RIM’s idea of a smartphone for potential users on a budget, recently dropped by and we’re putting it through a review with our arms wide open. If anyone knows how to stereotype a design, it’s definitely RIM that stands tall amongst the toppers. We’ve seen BlackBerry devices get sleeker and more lightweight over the years, but are they getting any better? Well, besides improvements in software, the Canada-based manufacturer needs to beef things up if they want to really give the competition a run for its money. And that seems to be what they intend on doing with the BlackBerry 10 OS which could be a game changer. But we’ll wait for time to tell that tale. 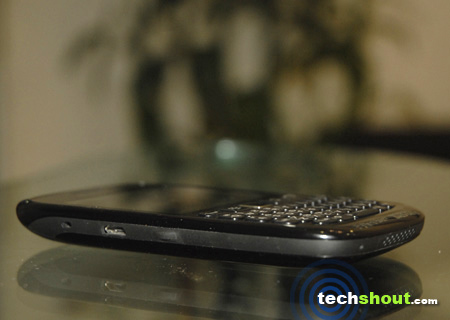 Specifications: What’s in it?

While we aren’t expecting much from this budget-friendly Curve handset, we sure do love surprises. So does its specifications sheet bring out any shocker of sorts? Well, no. Rather, we’re a bit unsatisfied with what RIM has whipped up here. If you’re a fan of streaming rich media content online, you’d better have a good Wi-Fi connection. Supported bands on this smartphone include GSM, GPRS and EDGE networks on 850/900/1800/1900 frequencies. It basically means there isn’t any 3G connectivity. Over the 802.11 b/g/n standards, you’ll be able to access the BlackBerry Enterprise Server as well as Internet Bundle and Direct IP web browsing. 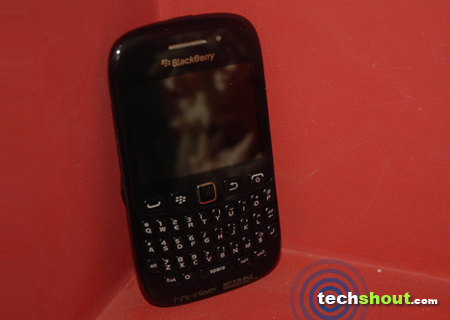 Lightweight as it is, the BlackBerry Curve 9220 measures 4.29 x 2.36 x 0.5 inches in dimensions. And fitted within its slim form factor is a 2MP fixed focus camera that proffers video recording and 5x digital zoom. The CPU is backed by 512MB of RAM for your multitasking needs. 512MB of eMMC flash storage is embedded within the handset, while the microSD card slot allows you to expand the capacity to an additional 32GB. Powered by the BlackBerry 7.1 OS, it flaunts a qVGA transmissive TFT LCD spanning up to 2.44 inches diagonally with 320 x 240 pixel resolutions and 164ppi. A 1450mAh removable Li-ion battery feeds the phone its power and it should deliver up to 7 hours of talktime or approximately 18 days of standby. For audiophiles, the total music playback time tips at 28 hours on a single charge. 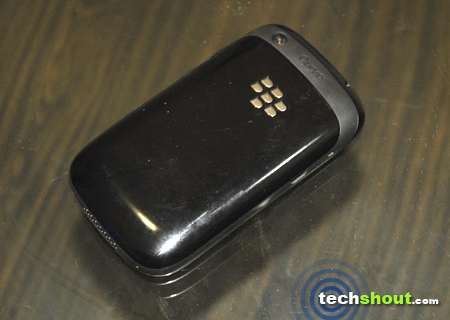 So we come to the design part. There isn’t much to say about the BlackBerry Curve 9220 smartphone other than it’s sleeker and more lightweight than its predecessors. You could say it’s a true BlackBerry which is highly similar to most of its siblings in the Curve family. Then again, which of them aren’t? The black glossy finish shines bright on the device and it even keeps the much-hated finger smudges in the spotlight as well. At 102 grams of weight, the handset isn’t a load to carry around. At times, it’s hard to know whether the phone is in your pocket or not. That’s a thumbs up for its slim profile. A thick bezel runs along the sides to the upper-rear panel and has a rubberize feel to it. The BlackBerry logo sits pretty on the back panel, while you can find the Curve branding in the usual place on the back. 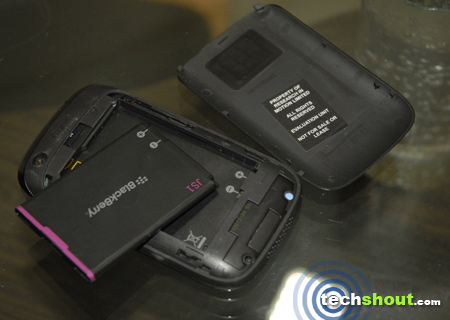 The left bezel is fitted with a dedicated button for quick access to one of the phone’s highlighted features, the BlackBerry Messenger application. You can even customize it to get you into any other app at the press of the button. Accompanying it is a micro-USB port for data transfer and charging purposes. The unlock key and the 3.5mm audio jack are allocated to the top, while volume controls, the pause/play button and the dedicated camera key take their place on the right. Head south and you’ll find the loudspeaker on the lower end. Not to forget the regulars, the 35-key backlit QWERTY keyboard is accompanied by the send, menu, esc and end buttons as well as the optical trackpad in the most obvious place ever. Slide open the rear panel and you’ll be presented with the battery, beneath it a SIM card slot and the hot-swap microSD slot on the outer surface. 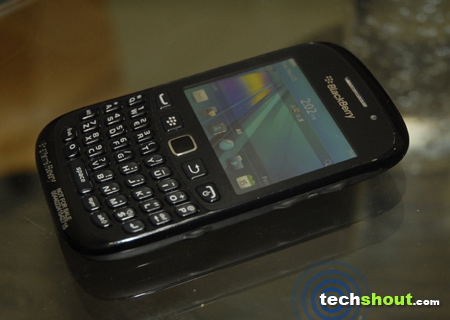 The BlackBerry Curve 9220 looks like your everyday BB smartphone, but does it perform like its siblings? We’ve laid hands on some of RIM’s wacky mixtures such as the Bold 9900 touch and type as well as the Curve all-touch handset. Both run on the BB OS 7 as well. However, in terms of fluidity in navigation, the Curve 9220 stands tall. A lag-free interface accompanied by a rich web browsing experience left us quite satisfied with the device. Entertainment and social networking are the strong points here. At the end of the day, if anything about the smartphone’s going to make you smile, it will most probably be the battery life which lasted an entire day. Once we were done fiddling around, 20% of power is what remained. That’s taking into consideration a few hours of Wi-Fi web browsing, streaming videos online, listening to music and playing a few casual games.

The Curve 9220 has an attractive price tag and it’s feature-rich as well.

The battery life can keep the device going all day.

The display’s pixel density is rather low.

A fixed-focus camera is fine for a low-budget phone. But how about a flash?

The keyboard is really noisy and the creaky sound can really get on your nerves in quiet surroundings.

If you desire a taste of what smartphones from RIM tow along, the BlackBerry Curve 9220 should be a decent pick. It’s high on entertainment, has a smooth interface to render swift navigation and even delivers a rich web experience over Wi-Fi. A 7 out of 10 rating is what we’re giving the device. For a price of Rs. 10,990 in India, RIM could do better. Some might say this device is overpriced and they may not be wrong to a certain extent. If you’re a fan of RIM’s socially connected handsets, this one could be the most cost-effective way for you to hop into the world of BBM.