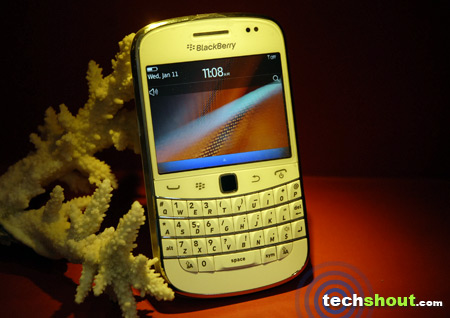 When RIM dropped in the BlackBerry Bold 9900 a.k.a. 9930 for a review, we were certainly eager to explore the offerings this smartphone had in store. Equipped with a brand new OS and powerful components as compared to previous releases, the addition to the Bold series is a nifty one from the company. Most BlackBerry phones may look alike, but this particular one has managed to incorporate a touchscreen and QWERTY keypad combination into its blueprint and still retain the traditional appearance that was originally started by the Bold 9000 handset. Eager as we were to share our experience with this device, our first order of business was to get into details about what we were dealing with. 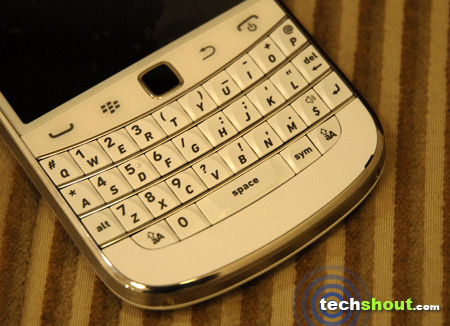 Boxed in black and wrapped with style, we received the BlackBerry Bold 9900 handset completely drenched in white. From within the package we managed to first extract a charger with interchangeable plugs for various wall sockets and a microUSB cable for PC connectivity. Then there were the usual booklets for getting started along with safety and product information. RIM also put in a soft and silky piece of cloth for rubbing out stains or smudge marks, a hard leather case that’s most certainly crafted out of premium material and a BlackBerry stereo headset which is by far, the most stylish pair of earphones we’ve come across till date.

The embedded 1.2GHz Qualcomm 8655 Snapdragon processor and the Liquid Graphics technology take a huge step forward in augmenting the performance offerings. But ‘Instant response times, smoother rendering and fluid animations’ are all that this Canada-based wireless devices manufacturer specified about the aforementioned technology. Needless to say, the integrated Adreno GPU is most likely to want some credit for these claims too. 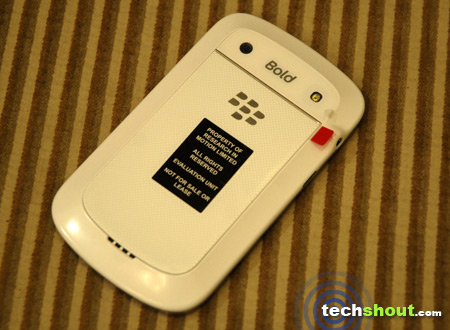 BlackBerry is mostly known for its distinctive messaging features. And compared to the various series offered, Bold is very visible on the company’s front-line, bearing premium features that aren’t just specs-related. The BlackBerry Bold 9900 follows closely on the lines of the original Bold 9000 that surfaced back in May of 2008. Well, they all might look the same, but compared to the Bold Touch and the aforementioned series, most models under the brand have somewhat of a slimmed down form factor. Although on the broader side, this smartphone is apparently the slimmest any BlackBerry Bold device has ever gone. In terms of dimensions, it measures at 115mm x 66mm x 10.5mm and weighs just about 130 grams. Getting a good grip on the chassis isn’t a problem, however the headphone jack is sure to raise concerns due to its awkward placement. 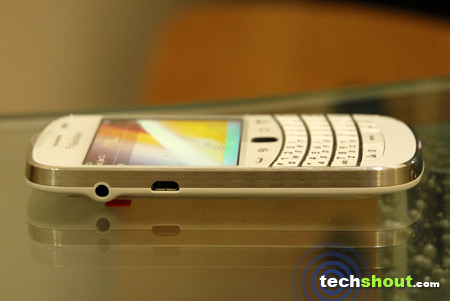 Simple as the Bold 9900 may look, RIM has indeed buffed it up with premium materials. A stainless steel bezel runs along the edges and encompasses most components like the 3.5mm audio jack and the microUSB port on the left, a dedicated camera button along with volume controls as well as a play/pause one on the right and the button to lock/unlock the device on the top. On its rear lies a 5MP camera that’s accompanied by LED flash and the removable back panel for accessing the SIM and microSD slot. The Nokia E6 might have adopted the QWERTY and touchscreen combination on a candy bar form factor before RIM did, but we’re of the opinion that the latter has done a better job than the Finland-based manufacturer. Just below the display are 4 physical buttons for carrying out the usual operations, an optical trackpad and the one component which adds spice to every BlackBerry – the QWERTY keypad.

The Bold Touch is powered by the BlackBerry OS 7. And compared to previous versions, not much has changed in the UI besides the enhanced set of icons and Liquid Graphics. Navigating through the optical trackpad is as smooth as always, but the touchscreen delivers a more suitable medium of browsing through menus. Stuff like messaging and sending emails are normally highlighted on BlackBerry devices. And owing to the brilliant keypad, tweeting, sharing content on Facebook and texting was an enjoyable experience. By the looks of it, RIM plans on delivering the best of both worlds through this combination. We’ve got to hand it to them, because surfing the internet on a BlackBerry was never considered that great. The touchscreen may be the highlight of this handset, but it’s not alone. The incorporated WebKit browser is clearly one of the major improvements and it’s most likely to the best feature of the entire OS. Lack of Flash support does weigh it down a bit, although websites load up really quickly and HTML5-based videos play with absolutely no hiccups. 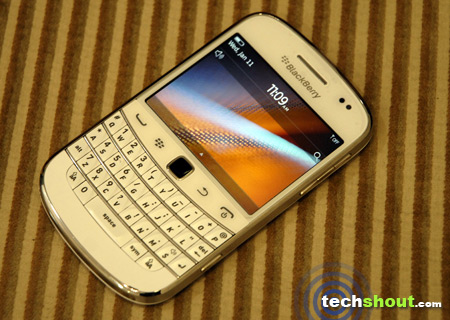 After going through the features offered by RIM on this smartphone, it disappoints us to say that a few of them don’t function so well. Besides the ones that require a BlackBerry service activated, applications like Maps, the BlackBerry App World and Music store tend to be a bit sluggish at times. The handset is indeed a mighty warrior on the productivity front, but here’s what it’s not – a satisfactory photographer. The rear facing 5MP is nothing like we imagined it to be. Each capture developed into a blurry picture unless the flash was turned on. To make things worse, the snapper employed is apparently a fixed focus type.

The 2.8-inch transmissive TFT LCD display lends quite an interesting impression and when teamed up with the QWERTY keypad, they make a nice pair.

Structure-wise, retaining the traditional look and enhancing it subtly have certainly taken up a lot of effort. And we’re glad RIM has bothered with that.

The addition of the WebKit browser makes surfing even more enjoyable.

Lack of customization options is mostly why the BlackBerry platform is losing its shine.

The fixed focus camera isn’t much of a snapper and HD video recording isn’t as smooth as it should be.

The battery drains out really fast and doesn’t last for an entire day with heavy usage.

There isn’t much that we’d change in the BlackBerry Bold 9900. But the question arises – can it beat the competition? Productivity-wise the handset is still superior and the high end components do give it the added boost in performance. However, RIM still seems to be missing out on certain aspects. We’ll leave it up to them to figure that out. So being the best that any BlackBerry-branded device could be, we’re happy enough to give the smartphone an 8.6 out of 10 rating. The handset can be picked up for approximately $579.99, or for around Rs. 33,000 in India.