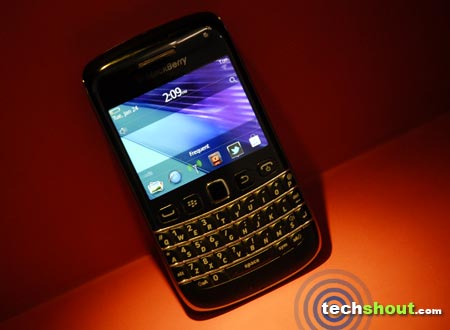 Saying that we’re impressed with the new lineup of devices from RIM, including the BlackBerry Bold 9790 which we’re about to review, is somewhat of an understatement. In fact, this Canada-based manufacturer seems to be on top of its game through the latest offerings. However, the question still arises as to whether they’re doing enough. The Storm series has already ventured down the road and its outcome is what stands as proof. Well, that was a long time ago. And maybe the entire notion of a full-touch BlackBerry handset is the main reason why it didn’t play well amongst fans, putting aside other possible issues. But it’s time we let bygones be bygones and hear what the Bold 9790 has to say, since the BlackBerry OS 7 could be a game changer. 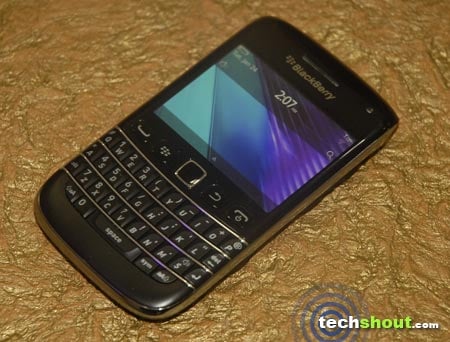 Unlike the Bold 9900 which we recently unboxed, the Onyx III or the BlackBerry Bold 9790, seems to miss out on a bit of pampering. We were actually hoping for some premium goodies like the ones that accompanied the former. But instead, the package which housed this review unit came along with a set of earphones, a microUSB AC adapter and a mini CD ROM containing BlackBerry user tools. For those who aren’t quite familiar with all the know-how related to operating a BlackBerry device, there are the usual safety and product information booklet for in depth details on specifications and features as well as a getting started one. 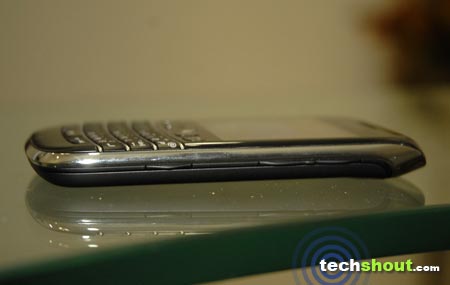 Bringing in the heat

As they say never judge a book by its cover, we never judge a smartphone by its looks. RIM can wrap its device up with anything, but down the line, it’s how the BlackBerry Bold 9790 performs that insists whether it’s a keeper or not. Although the device incorporates the touchscreen and QWERTY combination trend that the Bold 9900 first started, the hardware components aren’t quite satisfactory. As far as the specifications sheet reads, this smartphone is equipped with a so called ‘high resolution’ color TFT display that portrays visuals in 480 x 360 pixels over the 2.45-inch multi-touch display that has a pixel density of 246dpi. Fitted within dimensions of 110mm x 60mm x 11.4mm, RIM has bundled this handset with a 5MP continuous focus camera, LED flash and video recording capabilities in 640 x 480 VGA resolution. Memory-wise, there’s 768MB of RAM, 8GB of internal storage and a microSD slot for an additional 32GB hoarding capacity. To power all the aforementioned components is a 1GHz Marvel Tavor MG1 processor that’s backed by the 1230mAh JM-1 Li-on battery. 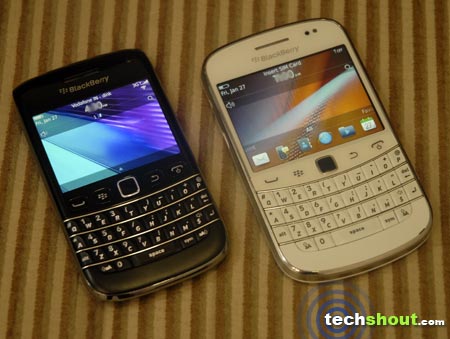 If you were to ask us to describe the BlackBerry Bold 9790 in one line, ‘a chip off the old 9700 block or nothing out of the ordinary’ is precisely what we’d say. But then again, the smartphone takes its cues from two Bold variants, namely the mini design shared by the Bold 9700 and the Bold 9780 series as well as the touchscreen and QWERTY combination on the Bold 9930 handset. Being the second offering from RIM to house a multi-touch display and the customary keyboard that’s employed by every Bold device, we’re quite fond of the device as a whole. Unfortunately, there always seems to be a flaw or two which gets us dramatically yelling out ‘Why RIM, why?’.

The volume controls and music play/pause button that are located on upper right edging integrate well into the frame. However, they’re extremely slim and a bit hard to press, especially the media key, that’s probably a millimeter thick. The hard plastic bezel which flaunts a shiny silver coating does glamorize the entire look of the device, but it gets scratched too easily. With the 3.5mm audio jack placed on the left edge, getting a firm grip on the phone is a bit hard when the headphones supplied by RIM are plugged in. To top it off, the overall build doesn’t even feel a bit premium despite the alluring and professional look. In addition to the aforementioned components, the lock/unlock button is located on the top and it’s neatly incorporated into the upper frame. We also ran into a microUSB port that’s centered at the lower end of the handset. Resting just below the display is a 35-key backlit QWERTY keyboard along with a few dedicated keys for carrying out specific operations. 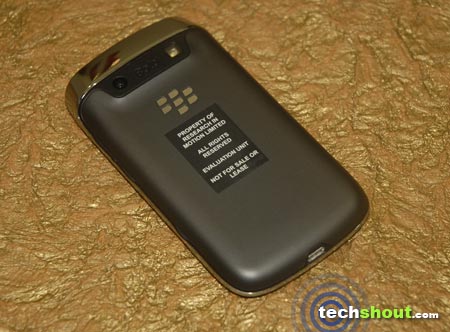 The touchscreen and QWERTY keypad combination is really beneficial. At times, it was more convenient navigating through web pages or menus via the capacitive display rather than with the optical trackpad. Preparing documents, sending text messages and even composing emails are absolutely no problem. The buttons on the keypad may appear small, but the slight incline in their design makes typing really smooth and quick. Compared to the previous generation platform, the BlackBerry OS 7 doesn’t bring in many changes. So getting accustomed to new features should not be much of a concern. The touchscreen is pretty much smooth, though it did turn unresponsive and freeze up here and there during our review. The BlackBerry App World doesn’t have too many interesting offerings when it comes to apps. But we did get our hands on some pretty good graphically enriched games. Talking about titles such as 3D RollerCoaster Rush Jurrasic 2, Fruits and Ninja and Angry Pigs (yes, total rip-offs of the originals), we ran through these with no problems whatsoever. At the end of all our tests which included around four hours of web browsing over Wi-Fi and 3G, a bit of gaming and heavy music listening sessions, the BlackBerry Bold 9790 managed to retain the battery life at a little lower than half its full capacity. 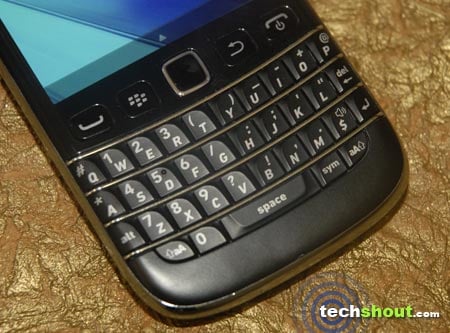 The Bold 9790 is designed quite beautifully, even if it doesn’t ‘feel right’.

The touchscreen and QWERTY combination really makes accessing menus and input of text a lot easier.

The 5MP camera is way better than the snapper employed on the Bold 9900.

The device tends to lag a bit, especially whilst trying to pause or resume music playback when the screen is locked.

After not even an hour of moderate usage, the handset already warmed itself up.

For the price tag that the Bold 9790 flaunts, VGA video recording at 640 x 480 pixels is simply not acceptable.

To sum everything up, the BlackBerry Bold 9790 is a pretty decent blend of the 9700 and the 9900 smartphones. It’s likely to be compatible with most applications hosted on the App World, including graphically enriched apps. And it’s certainly somewhere on the top shelf when it comes to productivity offerings and messaging capabilities like the BBM service, email and various others. If you’re looking for a more compact variant of the Bold 9900, then this handset should fit the bill. However, a price tag of Rs. 25,999 in India along with the lack of some of the aforementioned capabilities and features really amount to a downer. At any rate, we’re more than happy to give it a 7.8 out of 10 rating.