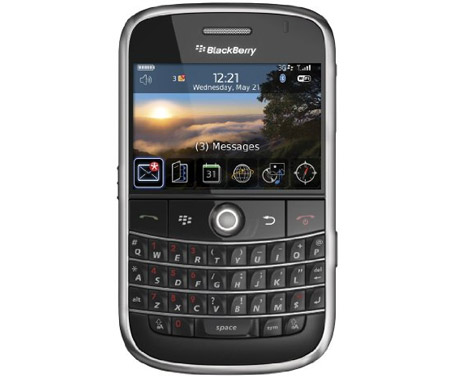 BlackBerry QWERTY phones of the older generation still appear to draw loads of attention going by the interest in the Bold 9000 in India which is being sold at a price of Rs. 7,000 online. This was the first smartphone to kick off the series that went on to add four more members and then make way for the 7 series.

The BlackBerry Bold 9000 shows off an elegant, old-school façade with its black color scheme highlighted by a chrome frame. The classic BlackBerry trackball is present above the QWERTY keypad instead of the optical trackpads sported by newer phones from the Canadian manufacturer. The look is very serious and business-like. And we can empathize with fans whose feelings of nostalgia are further stimulated by the low price in India attached to the device. 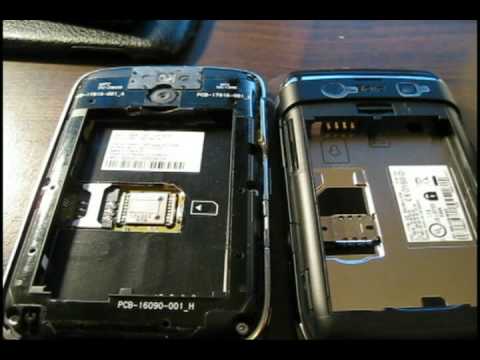 The BlackBerry handset has a 2.6-inch 480 x 320p screen on its front panel and is capable of running BB OS 5 (no hope of an update to OS 6). Most of the important connectivity features like the skill to latch onto 3G, Wi-Fi, GPS, social networking and Bluetooth are offered to users. Spelling out the networks it’s compatible with, it gets along fine with 3G HSDPA 2100/1900/850MHz as well as GSM/GPRS/EDGE 850/900/1800/1900MHz bands.

Just like the more venerable of the company’s product lineup, it has a low resolution 2MP rear camera complimented by flash, 2x digital zoom and video recording capability. On the memory front, the device has been outfitted with 128MB RAM and 1GB internal storage. The hoarding space is further expandable by up to 8GB for users who find that the onboard space falls short of their requirements. 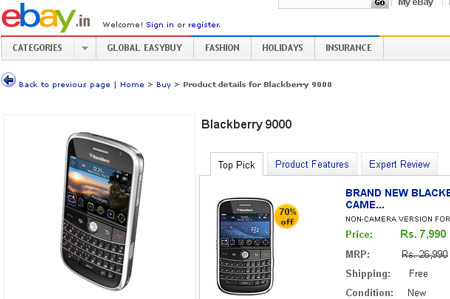 All of this technology is fitted into a chassis measuring 114mm x 66mm x 15mm in dimensions and tipping the scales at 136g. The 1500mAhr battery under the removable back panel keeps the phone in action for approximately 4.3 hours of talk time or 12.8 hours of music playback on GSM networks.

The BlackBerry Bold 9000 is available through certain retail outlets across the country. It can also be grabbed online through a couple of sources.