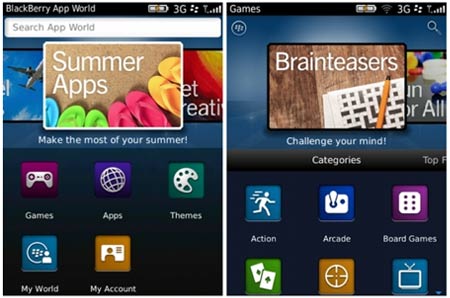 The BlackBerry App World 3.0 beta release has been in the offing for a long enough time to not surprise everyone off their seats with news of its launch. My Account makes a debut with this development and home screen happens to be enjoying a design overhaul apart from pinning a few new icons to itself.

The Search App World option now resides on the top of the home screen for simplifying the task of looking up apps, games or themes. What’s more, now there’s the ability to sort content by App Name, Price, Rating, Newest, Best Match and Popular.

Since games and themes are touted to be the most popular among all the categories, these two will find themselves as icons on the home screen. Placed under the new channels are Spotlight Banners for featured apps, sub categories as well as top 25 lists of Free, Paid, Recently Updated and New apps.

The top selection criteria in terms of apps have been touched up to make it clearly visible at a glance. It gets easier to shimmy between app summaries, screenshots and reviews within one screen courtesy of the new detailing.

My World steps in with painless subscriptions management and My Account is built to allow for convenient access to BBID and payment options, updated barcode scanning and additional search functionality.

The developers have even smoothed out the process of sharing apps through Twitter, Facebook, SMS, e-mail or BBM. Currently available for RIM smartphone users, BlackBerry App World 3.0 beta can be downloaded from BlackBerry Beta Zone.