BlackBerry A10 specifications are no longer a mystery 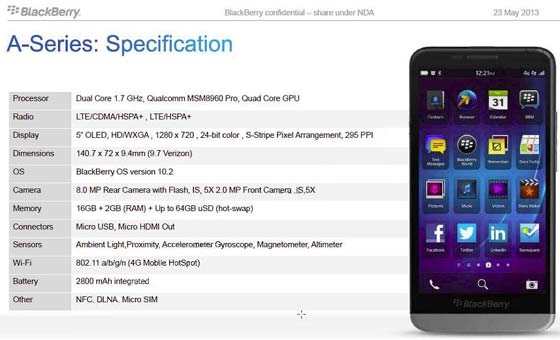 For today’s daily dose of leaks, we’ve got the specifications and features of the BlackBerry A10 which have managed to seep out into the open through a presentation slide. Also known as the Aristo, this will be the first BlackBerry smartphone to fall in the phablet category and it’s the second all-touch handset in the BB10 series.

The last time we heard about the BlackBerry A10 was just a few days back where images and a bunch of specifications managed to reach the internet. Also, the company was reportedly working on a BB7 smartphone dubbed 9720. The rumor noted that the device would arrive with a 5-inch Super AMOLED screen, a dual core processor and 2GB of RAM.

Well, the latest BlackBerry A10 leak has a lot more to say where specifications are concerned. A slide posted by a CrackBerry forum member has highlighted the phone’s technical details. Based on this, the handset will indeed rock a 5-inch 720p OLED panel with a 295ppi pixel density. Memory provisions are the same as the current flagship, 2GB of RAM, 16GB of storage and a 64GB complaint microSD card slot.

While the aforementioned features may not be much of an improvement over the Z10 (read our review), the BlackBerry A10 will employ a dual core Qualcomm Snapdragon S4 Pro SOC operating at 1.7GHz instead of the S4 Plus chipset on the former. Apart from these, the smartphone will be deployed with an 8MP rear camera, a 2MP front webcam, Wi-Fi, HSPA+, 4G LTE, microHDMI, and a 2800mAh integrated battery. Also, the device will measure 140.7mm x 72mm x 9.4mm in dimensions, and the Verizon model, on the other hand, will be a tad thicker at 9.7mm.

There isn’t the slightest bit of idea as to when the A10 will make an appearance and so, the possibility of price and release date details are farfetched.