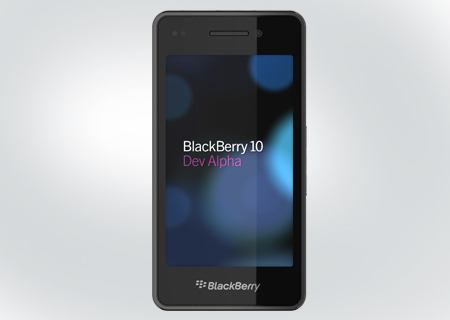 The BlackBerry 10 Dev Alpha is a prototype smartphone from RIM that’s said to run on an early version the company’s upcoming BB platform. This device was apparently handed out to all developers who attended the BlackBerry 10 Jam.

Just as the handset’s name suggests, it is powered by an alpha build of the BlackBerry 10 OS. And based on details provided by the Inside BlackBerry blog, the main purpose of releasing the prototype to developers is to help them prepare for the final launch of the OS. This allows companies to test and design their applications accordingly.

So what can we expect from upcoming BlackBerry devices? The smartphone in question houses an HD 1280 × 768p touchscreen that spans up to 4.2 inches wide. There’s also a micro-USB port for debugging and charging the handset along with a micro-HDMI jack for viewing content on larger displays. For connectivity, the options stand at Bluetooth and Wi-Fi as well as wireless network support through a micro-SIM card.

The BlackBerry 10 Dev Alpha smartphone is aimed towards development purposes only. That means we aren’t likely to find it in stores, unless someone plans on earning a few bucks through online retail channels. As previously speculated, devices running RIM’s upcoming platform are expected to surface by the end of this year.