Black Samsung Galaxy S3 can be pre-ordered in UK, should ship next month 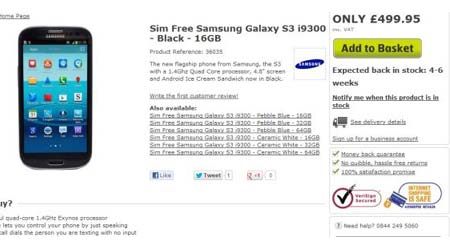 The black Samsung Galaxy S3 variant is now being offered for pre-order in the UK, providing users an alternative to the pebble blue and marble white colors. Similar to how the Galaxy Note 10.1 hit availability status in the US, this handset has arrived through an online retailer sans any official confirmation from the company.

The guys over at Android Authority state that the device in question isn’t anywhere near a launch just yet. The pre-orders being accepted are expected to ship in 4 to 6 weeks, although it isn’t for certain. So this would peg the release date for sometime during mid-September.

The news of this variant being in the works isn’t very surprising considering that the company has actually dished out plans of letting loose its flagship smartphone in a rainbow of shades. The garnet red version is already available from AT&T in the US and a few reports point to the possibility of various others making an appearance as well.

When it comes to specifications, the handset up for grabs via the online retailer’s website is the global edition which packs in a quad core 1.4GHz Exynos processor and 1GB of RAM for smooth operations. A 4.8-inch Super AMOLED display proffering an HD resolution is fitted to the front, while the rear is graced by an 8MP camera with LED flash and 1080p video recording.

The black Samsung Galaxy S3 price in the UK amounts to £499.95 through the mobilefun.co.uk website. As stated earlier, it’s expected to ship in the next 4 to 6 weeks.