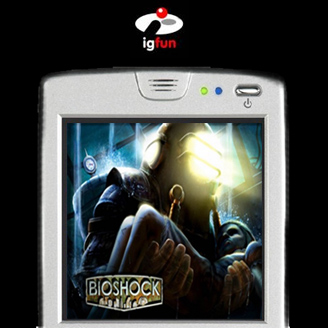 Here’s some fabulous news for fans of the first-person shooter game Bioshock. No longer will you be restricted to playing the game on just a PC or Xbox 360 console, but you will also be able to play Bioshock on-the-go via your mobile phones!

Since its launch, the game has been well-received by gamers worldwide. In fact, it has come to be known as the 2nd highest rated Xbox 360 game and the 3rd highest rated PC game till date.

Moreover, Bioshock has earned itself numerous awards ranging from “Best Xbox 360 game” to “Game of the Show” award to “Best Game Award” at popoular gaming conventions including the Leipzig Game Convention 2007, BAFTA 2007 and E3 2006.

Here’s a little something about Bioshock:

Bioshock is a first-person shooter game will role playing game customization elements. The game is set against the background of an Ayn Rand-inspired dystopian setting. Gamers have come to associate Bioshock with its morality-based storyline and immersive environment.

BioShock places the player in the role of a plane crash survivor named Jack, who must explore the underwater Objectivist-dystopian city of Rapture, and survive attacks, by the mutated beings and mechanical drones that populate it. The gamer will have to make meaningful choices and mature decisions, ultimately culminating in the grand question: do you exploit the innocent survivors of Rapture or save them?

This “genetically enhanced” first-person shooter lets the gamer do things never before possible in the genre: turn everything into a weapon, biologically mod body with plasmids, hack devices and systems, upgrade weapons and craft new ammo variants, and experiment with different battle techniques in an incredibly unique underwater city.

Sean Malatesta, CEO, IG Fun said, “We’re trying to do great things and BioShock on mobile promises to offer a whole new gaming experience and unmatched excitement amongst mobile gamers the world over. BioShock is a special game in its genre; it brings an element of conflicting morals which has an impact on the storyline, and, among other things, on the difficulty of the game itself.”

Vishal Gondal, Founder & CEO, Indiagames Ltd. spoke on this occasion saying “Bio-shock on mobile will herald the next level in mobile game development and gameplay experience. The PC and console version of the game has already been a huge hit and we are confident of replicating the success on the mobile platform too.”

IG Fun and Indiagames however, have not yet revealed the release date for Bioshock on mobile phones. But, the news itself was enough to make our day!