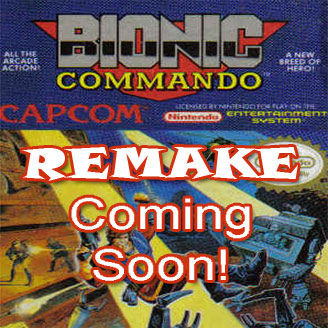 We really are enthused about this year’s Bionic Commando, but we’re more than happy to hear news of another one. According to an IGN report, Capcom has revealed plans to come out with a downloadable remake of the game which is expected to be called Bionic Commando: Master D Revival Plan.

The game will be released on the Xbox Live Arcade as well as the PlayStation Network for download on the respective video game consoles.

It is also known that the upcoming downloadable Bionic Commando: Master D Revival will be a 3D remake of the original Bionic Commando, known as Hitler’s Revival in Japan.

The game also promises to maintain the flavor of the original game, which could mean that there will be side-scrolling gameplay.

Further, Capcom will be adding a simultaneous two player mode, secret areas and some elements that will connect the classic title to the new fully 3D Bionic Commando: Master D Revival Plan.

It is also known that the Bionic Commando remake will be released as a paid download via Xbox Live Arcade and the PlayStation Store.

However, the price of the downloadable game still remains a mystery. Bionic Commando: Master D Revival Plan will be released in Japan this spring, but the launch date for other countries is not yet known.