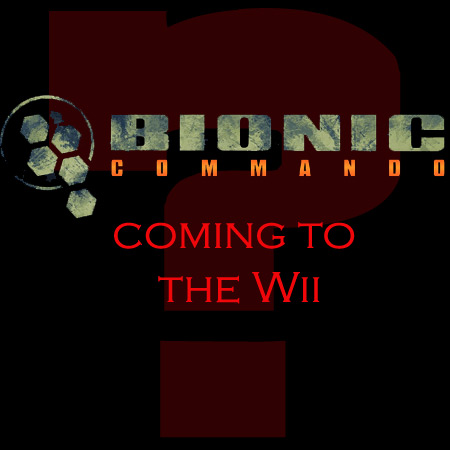 When the leading Japanese video games developer and publisher Capcom announced Bionic Commando, most gamers drooled seeing the game, which claimed to be packed with breath-taking graphics and an equally enthralling gameplay. However, when it was revealed that the title would be launched only on the Xbox 360, PS3 and the PC, Wii gamers were upset.

But as the single “Maybe tomorrow is a better Day” by the Finnish rock band Poets of the Fall aptly goes, maybe tomorrow (not exactly tomorrow, maybe sometime later though!) indeed could be a better day for Wii gamers. Why? Well here’s the good news!

Video game news website VideoGamer is reporting that Bionic Commando producer Ben Judd has hinted about the possibility of a Wii version of the game.

In an interview, whilst speaking about the prospects of a Wii version of Bionic Commando, he said, “It will largely depend on what the fans want for the future of Bionic Commando. If the interest is there, of course we want as many people as possible to appreciate this great franchise.”

So now all you Wii gamers, if you want Bionic Commando to grace your Nintendo next-gen console, then all you need to do is make some NOISE, and if it goes to the right (Capcom’s) ears, then voila you may be blessed with the Wii version of the game soon. Amen!