After flushing numerous dead goldfish down the loo, how do you placate a little brat who’s been begging for a pet? Tell him you’ll give him one if he can keep his bioluminescent Dino Pet alive perhaps. What is this inanimate, yet animate creature we’re talking about? It’s a plastic vessel (shaped like a dinosaur) that is filled with water hosting dinoflagellates, a species of plankton which glows in the dark.

Leave the Dino Pet in indirect sunlight or under a low watt bulb for up to 12 hours a day and watch it light up ‘magically’ at night. The container will need to be shaken in order for it to start shining, but it will continue to stay bright for quite some time after that. The dinoflagellates remain lively for 1 to 3 months. After that, Dino Food which is a mix of sterile salt water and nutrients, must be added every few months. This can be purchased from Yonder Biology, the brains behind the venture.

If you have kids who’re moderately careful with their toys, they should be able to keep the Dino Pet alive ‘forever.’ The dinosaur-shaped vessel holding it is 3D printed out of polyethylene based plastic material. To the inevitable question of ‘Will I glow in the dark if I drink what’s in it’ is the answer ‘Probably not, but it wouldn’t kill if you tried.’ We’re kidding. But in case of concerned parents wondering whether it’s safe, the makers claim that the species of plankton floating around inside the container is non-toxic. 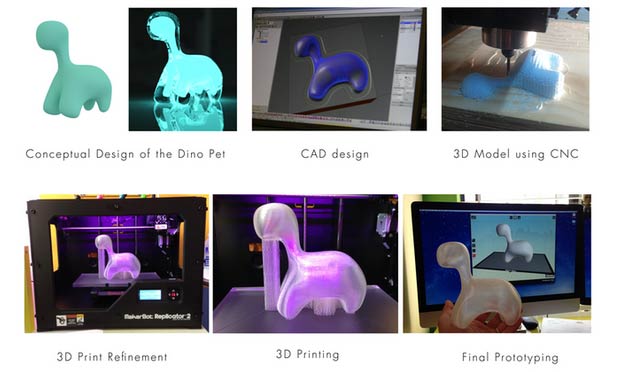 Yonder Biology has already begun accepting backers for this Kickstarter project which will commence shipping in April 2014. Currently, you can book the Dino Pet and a sticker for $40. For $60, the company will also throw in a bedtime storybook. Those who’re really eager to lay hands on this shimmering toy can get one by February 2014 if $75 is not out of your budget. Check out this page for additional details.

Yonder Biology has crossed its initial expectation of $50,000 in backing and has announced stretch goals. If the funding reaches $100,000, an app which includes a guide on when the Dino Pet has to be fed will be added to the goodies for those who pledge $30 or higher. On crossing the $150,000 mark, the project will also bring in an augmented reality (AR) experience for the storybook, something which hasn’t been explained in detail yet.