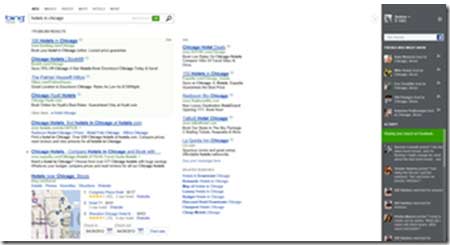 The positive response to the new and improved Bing update has apparently led Microsoft’s developers to put it up for everyone’s eyes through the search page, reports the Bing blog. This version, featuring a revamped three column design, has currently been made available only in the US.

Microsoft seems to have worked towards cutting down on the time people spend over searching the web by facilitating faster access to the required information. The social features integrated in the search enable users to share opinions and exchange ideas regarding their queries, which could be anything concerned with purchasing stuff to selecting a restaurant, just as they would do with friends.

“Most things in life are better with people you trust; in fact, more than 90 percent of people reported they are likely to seek the advice of friends and family as part of their decision-making process around events, purchases, travel, and said they will even delay a decision to first get input from family and friends. We designed the new social features in Bing to make it easy to exchange ideas, share opinions and take action, giving searchers the same confidence they get from bouncing an idea off a friend. With Bing, it’s easier than ever to get that input and go from searching to doing,” reads a post on the official Bing blog.

It also lets people start a discussion with friends as well as experts in the field, through Facebook or Bing, and follow friends’ activities to help them in case they have doubts. The center column of the Bing update dubbed snapshot, displays additional information such as maps or reviews and allows users to take quick actions that include booking movie tickets, restaurants as well as checking hotel rates amongst others. Along with the new search features, the company has also flagged off an advertising campaign called the Bing Summer of Doing.

As mentioned above, the updated Bing is available in the US.