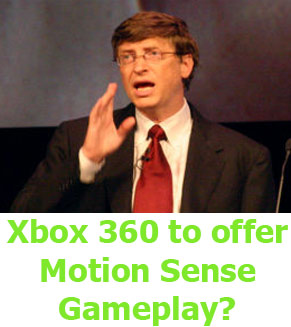 Microsoft head Bill Gates spoke about the future of gaming when he took the stage alongside Apple head Steve Jobs during the significant panel discussion at All Things Digital. Read on to find out what Microsoft has in mind for the future.

At the conference, Gates spoke about his vision to create a whole “new” video game control system which would allow a far more real set of movements to dictate what happens on screen.

When he outlined his idea for a remote control system that would “differ from the Nintendo Wii”, it must have sounded like he was definitely taking a path already trodden.

Gates said, “As we get natural input, that will cause a change. Software is doing vision and so imagine a game machine where you can just pick up the bat and swing it or the tennis racket and swing it.”

You may be thinking that the Nintendo Wii already has been there and done that. At the All Things Digital conference, it was suggested that this is what Nintendo has done in the case of the Wii.

But, Gates made a quick comeback by saying, “You can’t pick up your tennis racket and swing it. You can’t sit there with your friends and do those natural things.”

“That’s a 3D positional device, this is video recognition. This is a camera seeing what’s going on,” he said.

Bill Gates sure did stress on the fact that his game controller would be totally different from the Wii’s. Well, that sure does sound great. But does anyone remember the time when Gates praised Nintendo for their innovation in the Wii and on the other hand criticized elements such as the accuracy of the controller?

We’ll have to wait and watch. Till then, it’s back to the traditional but oh-so-cool Xbox 360 controller (which, by the way we are quite happy with)