Apple had announced its plans of launching the iPhone 3G in India nearly two months back. Since then, Indian mobile enthusiasts were waiting anxiously for the revolutionary device to be launched in the country. Fulfilling their wishes Bharti Airtel, Indian carrier of the iPhone, finally unveiled the handset at the stroke of midnight in a grand ceremony held at Mumbai. 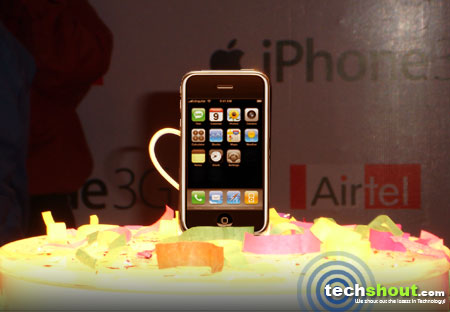 Apart from large memory capacity of 8GB or 16GB, the other salient feature of the third generation iPhone is its 3G capability. However Indian government has not permitted mobile service providers to offer the 3G service in India yet. This could prevent Indian consumers from buying the iPhone 3G.

Speaking about the absence of 3G services in India, K. Srinivas, Executive Director, Bharti Airtel, said that “Airtel will begin offering the 3G services to its customers as soon as government permits it. Till then iPhone owners will be offered 2G internet connection from Bharti Airtel.”

Besides 3G, users will be able to take advantage of all other features of the Apple iPhone. The phone comes with a large touch-screen, GPS capabilities and the new iPhone 2.0 software supporting Microsoft Exchange ActiveSync.

We do not expect the Apple iPhone to sell in large volumes in India as it did in U.S mainly due to the lack of 3G service in the country and due to its overpricing. The iPhone 3G in India costs almost triple its price in the United States.