Beware: Those invites to try out calling on WhatsApp are a scam

There has been a lot of talk about voice calling support on WhatsApp over the months and that has probably gotten you excited and impatient to give the service a try. Well, you may want to take caution if you ever receive messages on the IM application inviting you to activate the feature as they’re fake and force you to install third-party applications.

A report from The Market Business points out that scammers are cashing in on all the buzz about WhatsApp voice calling. As you probably know, you need to be invited to use the upcoming service. The process for this is that someone already with the capability simply needs to call you to enable voice services on your account. 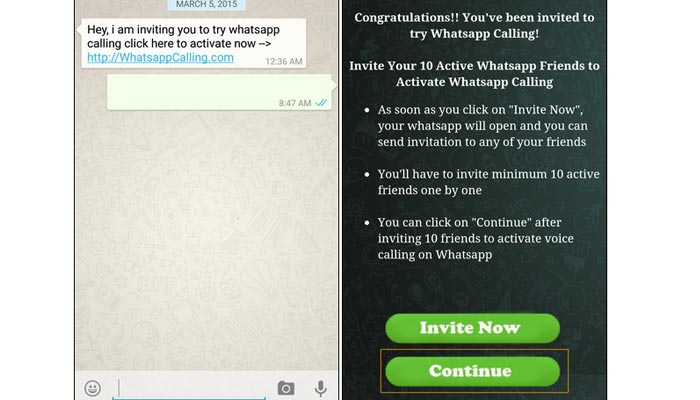 A lot of users don’t really know this which is mainly why scammers have been successful at sending out fake invites promising to activate the feature on phones. You’ll probably see messages like the one in the image above with a link to an unofficial website and they’ll come from one of your own contacts. That’s because you’re asked to spread the word to 10 people before you’re given access to voice calling.

But it doesn’t end just there as you’ll further be taken to a survey website and forced to download apps to continue. Well, there’s nowhere to go from here as completing the survey is the end of the road and you’ve successful been tricked by scammers to download content and look at ads, earning them cash.

The technique being used by scammers here is very effective as a lot of people are craving for voice calling on WhatsApp. We recommend not clicking on links promising something that hasn’t been launched as yet unless they come from reputable sources and to stay away from third-party clients as they can get you banned.