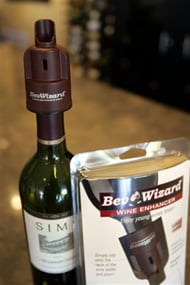 A new wine gadget has come into the market, which promises to save money and palates by using magnets to give young wines the ability to mature faster. Called Bev Wizard, the gadget retails at $30 and is surely attracting attention in wine taster circles.

The Bev wizard is the invention of Patrick Farrell, a physician by training who is also a master of wine, a certification administered by the London-based Institute of Masters of Wine that is widely recognized as a rigorous demonstration of expertise.

Farrell started out tying magnets to the neck of a bottle at the urging of business acquaintances who were distributing magnets to try to improve water quality. At the time, he thought the chance magnets would work on wine was “about the same as seeing pigs fly.”

Eventually, he came up with a molded plastic device that looks like a regular non-drip pourer and has an air hole to speed up oxygenation. That intensifies the effect of the wizard and differentiates it from other magnetic devices on the market such as The Wine Clip, which clasps around the bottleneck, says Farrell.

He believes the wizard works by creating a magnetic field that changes the shape of a wine’s tannins, making them larger and softer. For those who are unaware of what Tannins do for wine, they are astringent components from grape skin and seeds, and in some cases oak, which give structure to a wine but can make it taste bitter.

Bottle aging can mellow out the tannins as can decanting hours prior to drinking; the Bev Wizard is a shortcut, says Farrell.

A Chemistry professor at the Cleveland State University, David W. Ball, is having none of it and is playing the role of a skeptic. “Testimonials are irrelevant. Tastings are not proof,” says the professor who is also an “amateur wine snob”. Ball claims magnetic fields aren’t strong enough to change the shape of tannins. “All that magnetic field is doing is separating you from your money,” he says.