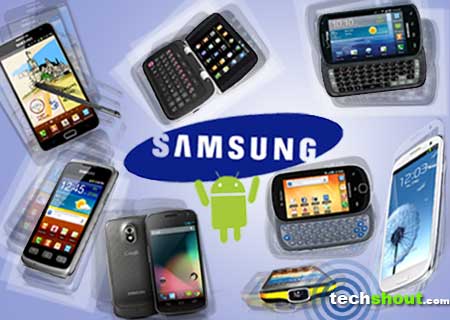 Today’s roundup of the best Samsung Android phones comes with handpicked selections proffering features that make them stand out from the crowd. The devices we’re about to jot down are both old and new, but equally deserving of the attention. What’s more, they cater to various needs ranging from entertainment to web browsing to enhancing productivity. We’ve even thrown in a couple of handsets specifically for you texting fans out there. 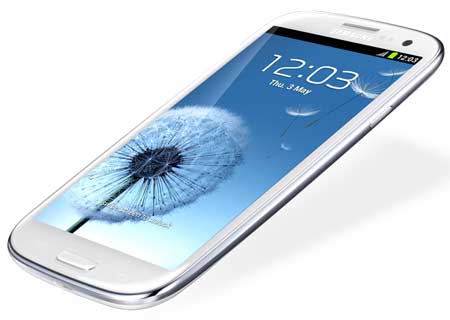 Now what could be better than starting off a compilation exclusively from Samsung, with none other than the Galaxy S3? The device in question has managed to create a stir and has turned out to be quite a seller. The credit for that goes to the interesting list of features it packs in. The highlighted hardware components include a quad core Exynos 4 Quad processor with 1GB of RAM for the global version or a Snapdragon S4 and 2GB of RAM on the 4G LTE variant, as well as a 4.8-inch HD Super AMOLED display and an 8MP camera proffering zero shutter lag. On the software front, you’ll be treated to goodies such as S Beam, AllShare Play, Direct call, S Voice and much more along with the ICS platform. 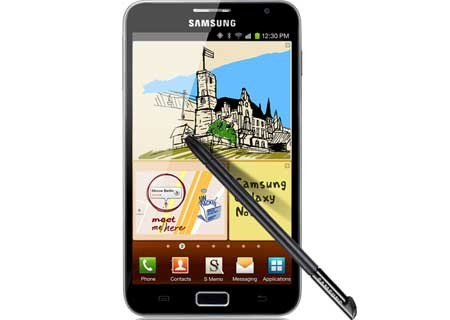 What makes the Galaxy Note a ‘noteworthy’ contender in our lineup are the premium features it has to offer. Not only does it comes with a relatively large HD Super AMOLED display which measures at 5.3 inches, for spectacular visuals, but also performance-driven components including a 1.4GHz dual core processor and 1GB of RAM on the inside. If you’re constantly on the move, you’ll have various features at your disposal such as Bluetooth 3.0, Wi-Fi b/g/n and an 8MP rear camera with LED flash as well as 1080p video capture to keep you entertained. To top it off, you’ll also receive the S Pen, an intuitive tool that’s aimed towards enhancing productivity when coupled with the right software. 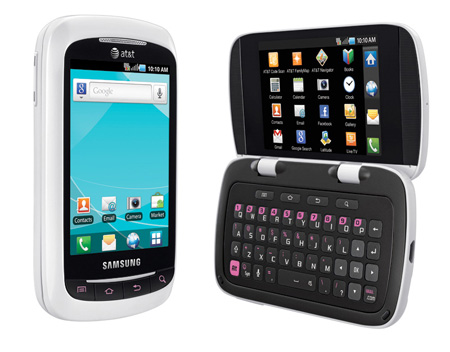 The DoubleTime may appear to be an ordinary handset, but looks can be deceiving. If the device’s name hasn’t tipped you off by now. It basically denotes the existence of dual touchscreens plus a QWERTY keyboard. Odd as it may sound, the handset takes on quite a stylish appearance with a 3.2-inch 320 x 480p display sitting pretty on the front. And once you open the lid, you’ll find a second touchscreen of the same size on one half of the body, while a full QWERTY keyboard rests on the other side. Speaking of hardware, the handset comes with an 800MHz Qualcomm S1 SOC and a battery that’s capable of delivering up to 6 hours of talktime. 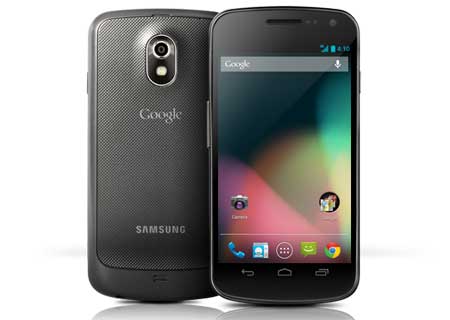 The Galaxy Nexus needs no introduction and you’d probably know why we’ve got it on today’s roster. If not, then listen up – the Nexus is not only the latest flagship Google handset, but also the first of its kind to get a taste of the Jelly Bean platform. A 1.2GHz dual core processor runs the show here, accompanied by 1GB of RAM and a 4.65-inch Super AMOLED HD display. If these aren’t enough, you’ll also be treated to a 5MP rear camera with LED flash and 1080p recording as well as HSPA+ 21Mbps downlink speeds for an enhanced browsing experience. The HSPA+ version is available with the latest edition of Google’s mobile platform, through the Play Store. 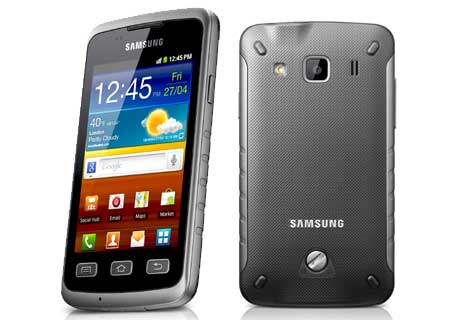 We’ve seen a variety of handsets roll out through the South Korean manufacturer, each catering to a specific need such as entertainment or productivity. Similarly, our next addition has aims to deliver certain standards as well. Dubbed the Galaxy Xcover, the device is designed to withstand the harshness of everyday use to extreme levels through its IP67 certified dust- and water-resistant form factor. Powered by the Gingerbread platform, this rugged piece of hardware incorporates a 3.65-inch HVGA touchscreen which makes accessing features such as Social Hub and Swype a breeze. Exploring the 12mm thin body, you’ll also find a 3MP camera, a microSD card slot supporting up to 32GB and a 1500mAh battery fitted within its slim design. 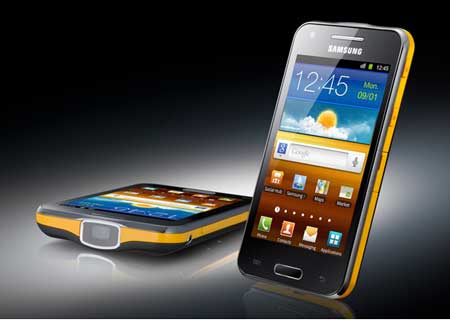 Now what could be cooler than popping out your handset and projecting some of the latest music videos or some fancy images on almost any surface? The Galaxy Beam is capable of displaying content in nHD resolutions of 640 x 360p at up to 15 lumens, one of the main reasons why it’s earned a spot in the compilation. What’s more, the projection attribute is only the icing on the cake as this handset can do even more than just entertain. A 4-inch WVGA TFT display is fitted on the front, while the innards feature a 1GHz dual core processor, 8GB of hoarding capacity and a 2000mAh battery that proffers up to 3 hours of continuous projection. Apart from these, it also sports a 5MP camera with flash, up to 32GB microSD expandable storage and much more, employed within dimensions of 124mm x 64.2mm x 12.5mm. 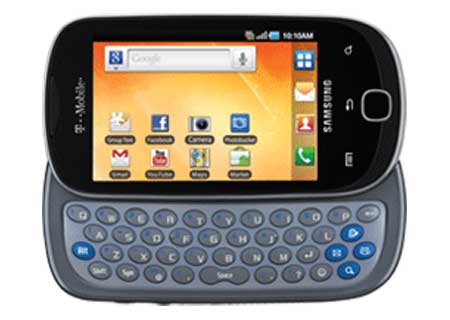 While the majority of handsets we’ve listed out belong to the Galaxy family, the Gravity Smart is the first Android handset in the company’s Gravity lineup. This little slugger packs a decent punch with its 600MHz processor and 3G network support. For swift navigation, a 3.2-inch touchscreen is employed on the front and if you were to slide the rear part of the device upward, you’ll be presented with a 4-row QWERTY keyboard for quick text input. Wait, we’re not done yet – the handset is capable of delivering up to 9.3 hours of talk-time or 24 days of standby through the 1500mAh Li-ion battery. 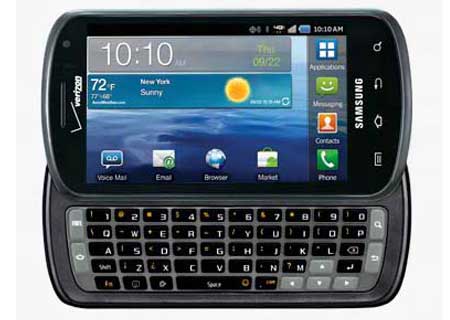 To drop the curtain on today’s compilation, we’ve got the Stratosphere handset that’s similar to the Gravity Smart, but beefier in terms of specifications. The device holds the crown of being the first to debut on Verizon bearing a QWERTY keyboard. And that’s not all – it even operates on the carrier’s 4G LTE network for a rich browsing experience. Apart from the 5-row slide-out QWERTY keyboard, the device takes on a 4-inch 800 x 480p WVGA Super AMOLED display featuring 720p HD video playback. A 1GHz processor does all the heavy lifting, while 4GB of internal storage and a microSD card cater to memory needs.

So you’ve now seen what the best Samsung Android phones look like and even read what they’re capable of doing, and that’s pretty much all you need to know. What we wish to know is which of these aforementioned devices you’d fancy picking up. Will it be the performance-driven ones or feature-packed options? You can let us know by dropping in a comment or two below.