Best of CES 2011: Top Tablets that could sit on the shelf with Apple’s iPad

What do tablets and God have in common? They’re both omnipresent. We can’t help believing in this notion because we remember waking up to tablet news and throwing in our towels for the day with the word on our lips all of last week. Trace a finger back to the success of Apple’s iPad and the anticipation for a version deux before wondering why, if you haven’t already done that. Now it’s tablets everywhere in tech world. Taking into consideration the Honeycomb or Android 3.0 OS that is optimized for slates, even Google thinks these gizmos are worth a whole lot of time and effort. We thought it’d be fun to recall all of the tablets which stood out at the CES 2011 among the umpteen offerings led out by companies like Motorola, Dell, Asus, Lenovo, BlackBerry and others. So we did just that. 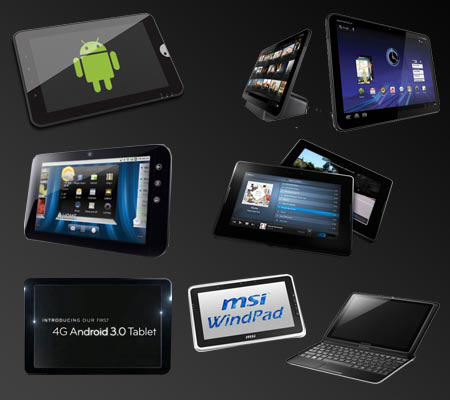 Motorola Xoom: With a 10.1” 1,280 x 800p widescreen HD touch-display and a 2GHz dual-core processor providing the steam to the Motorola slate, the Xoom could just offer some stiff competition to Apple’s iPad which is probably very lonely at the top. We remember saying once that we don’t fancy holding an expansive slate to our face and snapping up pictures. But even if you skip over the 5MP rear camera, there’s still a 2MP one on the front bezel for video chatting over Wi-Fi, 3G or 4G. At the same time, it’ll be hard to ignore the fact that the Honeycomb OS is the tablet’s most interesting aspect. Support for Adobe Flash Player, an HDMI output port and a number of sensors are all part of the notable specs dotting the list of features accompanying the Xoom.

Dell Streak 7: Thought the first Streak member pinched on screen estate with the 5” width? The Dell Streak 7 has a tough Gorilla Glass WVGA touchscreen that’s larger by 2” and throws up the Stage UI. Slated for a T-Mobile launch, this Android 2.2 device can render up to 32GB of hoarding space and supports Adobe Flash Player. It is powered by the much coveted 2GHz Nvidia Tegra 2 dual-core processor and incorporates a 5MP lens on the back panel as well as a 1.3MP front-facing camera. We’re imagining that portability is a huge factor behind the design concept or Dell would’ve almost certainly gone with a display larger than 7” on this Streak successor.

MSI WindPad: Remember the WindPad tablets which were unveiled at the Computex 2010? The only reason they stand out among the CES exhibits is because MSI appears to have put in some half-hearted effort in an attempt to prep these up for the show. The WindPad 100A is the company’s bet on Android, while the WindPad 100W runs Windows 7 Home Premium. Both sport 10.1” multi-touch displays and Wi-Fi capabilities. The WindPad 100A uses an ARM processor and the WindPad 100W embeds an Intel mobile processor. We can’t quite put a finger on it, but these MSI slates seem to lacking oomph in some way or the other. It’s a pity, since a lot of MSI netbooks pack in a good punch by way of the battery life department and we were looking forward to a pleasant surprise here.

Toshiba tablet: Honeycomb OS? Check. Dual-core processor? Check. Toshiba had already picked two exciting elements for their as-yet-unchristened tablet with which to attract everyone’s attention. Although it does not yet run Android 3.0, the device does boast of some appealing features. Flaunting a 10.1” touchscreen which can play out Adobe Flash content too, the exterior hosts two cameras, a SD card slot, USB 2.0, miniUSB and HDMI ports. With the changeable rear cover and its EasyGrip design, we can safely say that the personalization options for the exterior have not been forgotten either.

BlackBerry 4G PlayBook: Another tablet which got our fingers itching was the BlackBerry 4G PlayBook powered by the BlackBerry 6 OS. But RIM refuses to participate in the 2GHz dual-core processor game with this one and even sawed off the display at 7”. The touchscreen looks pretty responsive and plays out HTML5, Adobe Mobile AIR and Adobe Flash Player 10.1. Lined up for a Sprint release in summer, users should be able to engage in games like Quake on this slate courtesy of Open GL accommodation for 2D and 3D graphics intensive applications.

Lenovo LePad: Lenovo’s not just got out any tablet with the ‘LePad’ but ‘The Pad’! It could perhaps deliver a wholesome computing experience with Microsoft’s Windows 7 OS and the companion IdeaPad U1 base sporting a proper sized keyboard. This add-on features the Windows 7 Home Premium OS powered by Intel’s CULV processor and transforms the slate into a laptop PC. A clever idea, if you mull over the fact that tablets are not very productive when it comes to typing on them considering the lack of tactile feedback. Unfortunately, Lenovo has only revealed plans to launch it in China so far.

Samsung PC 7 series sliding tablet: We had yet another notable Windows 7 gadget which happened to be more of a sliding tablet PC than a pure breed slate. At the same time, we’re kind of shaky about the code-named ‘Oak Trail’ specs because of the processing potency Intel Atom processors are known for, granted the expectation of extended battery life. You have a 10.1” touchscreen, 3G connectivity, a physical keyboard which slides behind the chassis, DLNA capability, HDMI out, USB 2.0 port and 1.3MP webcam on this Samsung offering. For obvious reasons, it strikes us as a differently-designed netbook instead of a sliding tablet PC.

LG G-Slate: T-Mobile and LG also got onto the tablet merry-go-round to announce the G-Slate with Google. Sounding more like a rap star than anything else, this is the first such 4G device from the two companies. But then they could have done much worse with the name, if we make an example of the snigger-inducing WindPad. Dripping with the incredibly hot Honeycomb experience, LG and T-Mobile were rather reluctant to give out the skinny on their upcoming tablet until the CES broke out. Post-CES, it looks pretty impressive and T-Mobile will hopefully add it to a roster already containing the Dell Streak 7 and Samsung Galaxy Tab soon.

Though we’ve covered all the newsworthy tablets, the G-Slate does not complete the lineup of slates which made it to this year’s CES, or we’ll probably be reciting the list until the cows come home. And chances are that a dozen more companies will have slipped in some new tablets worth ogling at in the mean time.