Our roster of the best Nokia phones in India has been scribbled down to help you pick out a device that suits your needs just right. You can choose one of these phones if you are not much of an Android fan or if you wish to explore the Windows Phone 8 and the Asha platforms. The Finnish manufacturer has a set of impressive gadgets on sale in the country and apart from a varied range of smartphones, there are some feature phones as well. In case you are not into touchscreens, Nokia continues to offer basic devices with physical alphanumeric and QWERTY keyboards and one of them has been added to this compilation. Scroll right down to find out what exactly the OEM has in store for you. 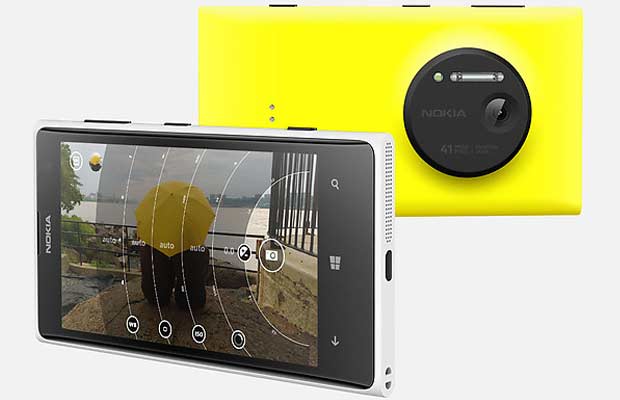 The Nokia Lumia 1020 is a smartphone meant for casual photographers, considering that it is graced by a 41MP PureView camera with Xenon flash. It is adorned by a 4.5-inch ClearBlack WXGA touchscreen and sports a 1.2MP webcam along with a dedicated button to launch the two snappers.

This WP8-based gadget acquires steam from a 1.5GHz Snapdragon S4 processor and 2GB of RAM and offers 32GB onboard memory. It is slated to be released in India on September 26 and is already up for pre-order through some e-retailers. 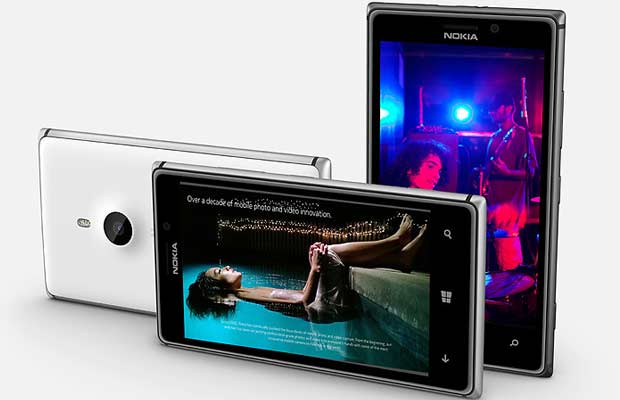 This smartphone from Nokia builds up on the features of the Lumia 920 and unlike all other Lumia phones which are crammed into polycarbonate exteriors, the 925 shows off an aluminum body drenched in black, white or grey. A 4.5-inch 1280 x 768p AMOLED touchscreen with Corning Gorilla Glass 2 rests on the front along with a 1.2MP webcam, while the rear panel plays host to an 8.7MP PureView camera with some advanced photography features.

Under the hood, the handset hides a Snapdragon S4 chip, 1GB RAM, 16GB onboard memory and a 2000mAh battery amongst a number of other things. 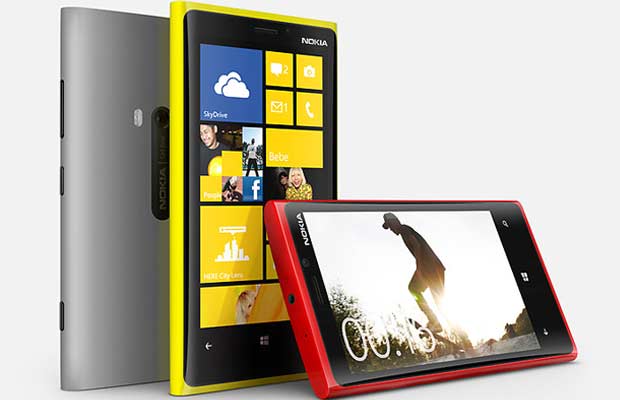 The next gadget to have found a mention in this roster is the Lumia 920, which is available in vibrant shades like yellow, white, black and magenta. It is almost similar to the 925, except that the one in question has a polycarbonate body and 32GB mass memory.

And as is the case with all the devices in this range, this handset too offers 7GB of free SkyDrive cloud storage. 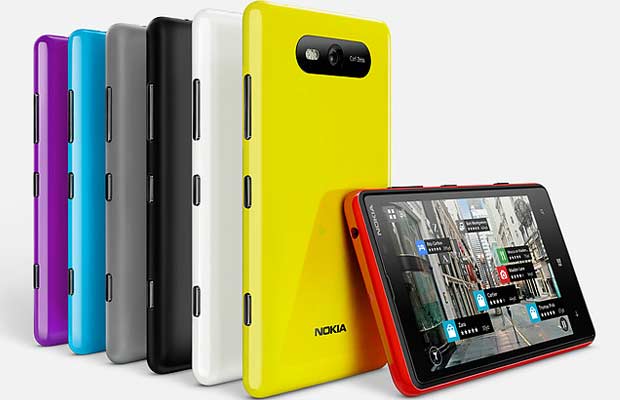 If a mid-range phone that suits your budget is what you wish to go for, then Lumia 820 is the perfect candidate. Powered by the Windows Phone 8 platform, the gadget operating with the assistance of a 1.5GHz dual core processor and 1GB of RAM has a 4.3-inch AMOLED WVGA touchscreen.

An 8.7MP camera with Carl Zeiss optics and a webcam have been tossed in to the mix along with 8GB expandable memory and a 1650mAh battery. You can pick it up in shades like black, white, cyan, magenta and yellow. 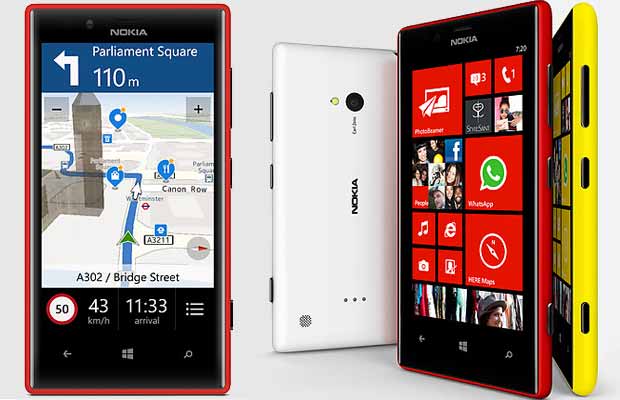 Another mid-range device that deserves a mention in the roundup is the Lumia 720, a 4.3-inch smartphone that although relies on the 1GHz Qualcomm Snapdragon S4 processor, has 512MB of RAM under the hood.

Its ClearBlack IPS LCD touchscreen with a Corning Gorilla Glass 2 coating can deliver visuals in 800 x 480p resolution and is accompanied by a 6.7MP camera with Carl Zeiss Tessar lens and a 1.3MP webcam. 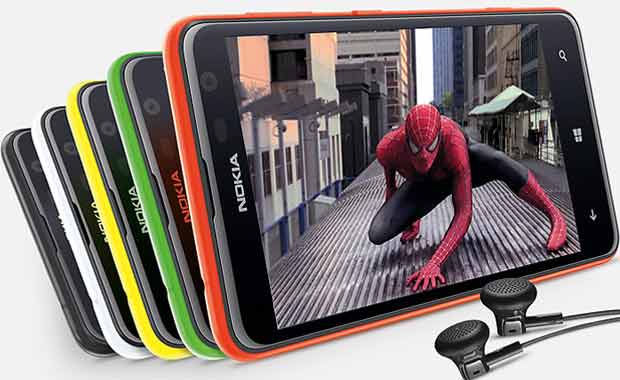 This phone is officially the biggest Lumia device available in the country as it accommodates a 4.7-inch IPS LCD WVGA touchscreen on the front panel. You get a 5MP rear camera as well as a webcam with the ability to record videos, apart from 8GB expandable memory and 512MB of RAM.

A 1.2GHz Qualcomm Snapdragon S4 rests within the confines of the gadget alongside a 2000mAh battery. This smartphone comes splashed in hues of black, white, orange, lime and yellow. 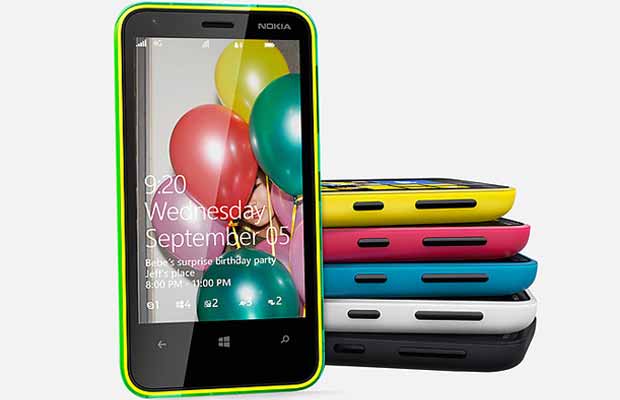 Up next is the Lumia 620, an affordable phone that flaunts a 3.8-inch touchscreen and a 5MP camera. The driving force behind the gadget is the same Snapdragon S4 processor that is found in all the other Lumia devices and this one clocks in a speed of 1GHz.

512MB of RAM and 8GB of onboard storage are what you’ll find in the device which draws power from a 1300mAh battery. 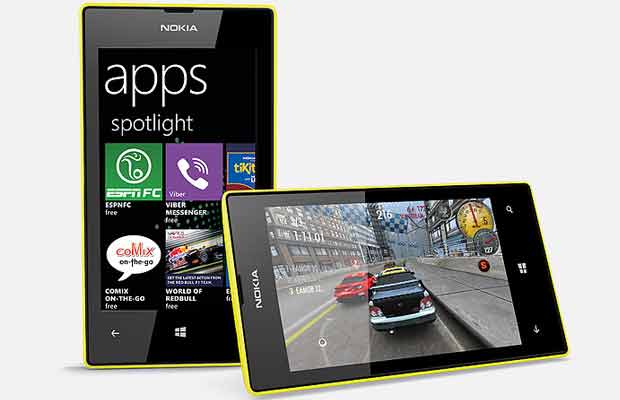 Nokia has a device for people with all types of budgets and the Lumia 520 is for those who wish to make the most of the WP8 smartphone experience without digging very deep into their pockets.

You get a 4-inch WVGA touchscreen, a 5MP camera with a dedicated button, 512MB of RAM, a 1GHz dual core Snapdragon S4 processor, 8GB onboard memory with an option to increase it by up to 64GB and a 1430mAh battery amongst a number of things. 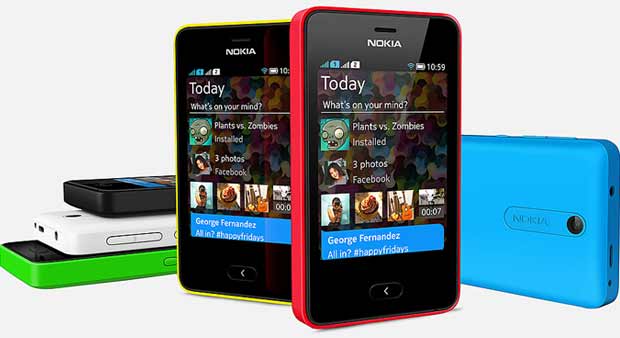 Nokia’s Asha range of feature-rich devices has some great options for those of you who are not much into high-end gadgets. The Asha 501 is a full-touch handset complete with a 3-inch screen, a 3.2MP camera and dual SIM card slots.

Based on the Nokia Asha software platform 1.0, it has 64MB of RAM and a 1200mAh battery. The gadget lets you browse the internet and is available in shades of black, white, magenta, cyan, yellow and green. 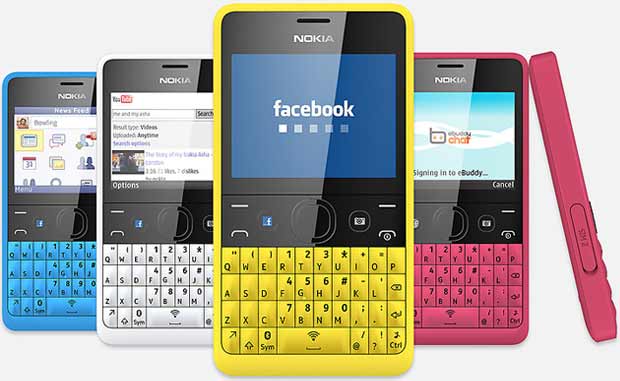 And if you just can’t do without a physical keyboard, take a look at the Asha 210. Its front side is dominated by a QWERTY keypad and a 2.4-inch display, while the rear side hosts a 2MP camera. The device is powered by the Series 40 Asha platform and supports a microSD card of not more than 32GB capacity.

But the main attraction of this phone is a dedicated Facebook button that takes you directly to the social networking website so you can connect with friends while on the move.

These were the best Nokia phones in India and we think by now you may have made up your mind regarding the phone you’ll be opting for. So, which one is it? Do tell us. And it should be noted that the costs mentioned here are official ones and chances are that some retail stores and shopping portals are selling them for discounted prices. Check them out before you pick up a device.