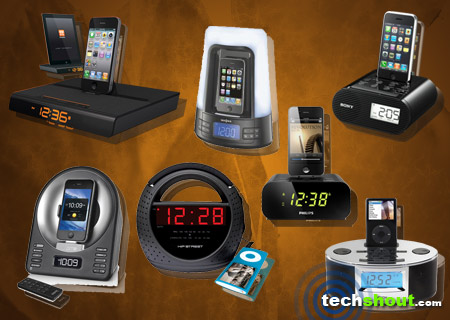 Since you are looking at the best iPod clock radios, you probably own one of these music centric Apple gadgets and love waking up to your preferred tunes. You might even want to present it to a dear one, if not for yourself during this season of love. To help make mornings more melodious and beautiful, we have picked out a suite of seven such gadgets which blend several attributes into small sized form factors. As the title suggests, these devices will not only reel out your iPod playlist out loud, but are also capable of streaming your favorite radio shows even as your alarm sound. So here is our assemblage of iPod clock radios, aimed at harmoniously awakening you to a wonderful time ahead. 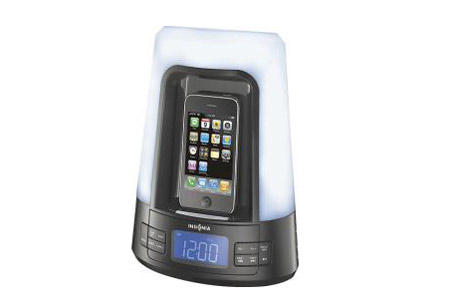 The way it practically accommodates your iPod, this Insignia offering looks like it is capable of affectionately putting it to sleep as well. The Insignia NS-CLWL01 might prove to be a good option if you are a heavy sleeper and need something fairly loud to stir you from your slumber. You can preset up to 20 radio stations on this one, for times when you might want to listen to a different genre or station every day. It also has arrangements for a wake-up light which can be adjusted to low, medium or high levels. This is meant to notify you about 15 to 20 minutes before your alarm is scheduled to ring. 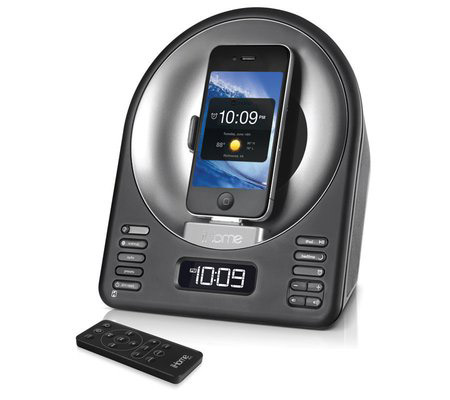 The iHome iA63 sports a fresh, modern day design. While the shape should remind you of a conventional alarm clock, the overall look is fairly new with a simple interface. Its aesthetic value is enhanced by a rotating motorized dock which can be used for the iPod as well as the iPhone. For the kind who needs to be awakened more than once to bring them back from dream world, which possibly includes a majority of us, the device allows you to set a snooze time from anywhere between one to twenty-nine minutes. Gradually increasing or decreasing alarm sounds make it helpful to wake up or go to sleep in a soothing manner. It is also accompanied by a remote so that you don’t have to struggle to reach the table top, or wherever it is placed. 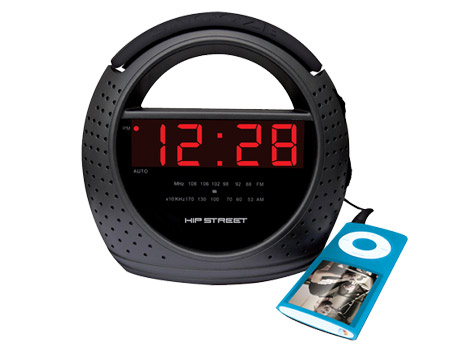 The Hip Street HS-CR952 is recommended for owners of the Apple handheld music gadget who hope to find a clock radio dock for iPods other than the touch variant. We say this because unlike various other contenders in the iPod clock radios list, it does not differentiate between the several types of iPods put forth by the company. It includes a connector which can be plugged into the port on these portable music players. If you appreciate simplicity in a gadget, this one looks like a good choice for you. 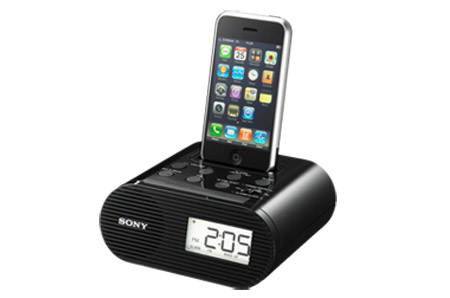 If you want to take a break from the basic black or grace your bedside with a more serene tech option, a certain Japan based manufacturer has something in store for you. Dressed in either black or white shades, the Sony ICF-C05iPBLK is as good as a simple alarm clock with a digital display, expect that this one has provisions for docking an iPod. Apart from your iPod and radio, it also gives you the choice of waking up to a buzzer sound, if that is what you prefer. You can preset about twenty AM or FM stations and the snooze timings are extendable from ten minutes to one hour. 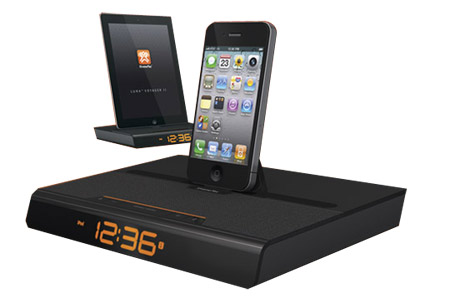 The XtremeMac peripheral can sit pretty inconspicuously wherever you place it, unless it is paired with an iPod. Apart from the dedicated music gadget, it is also capable of docking the iPhone as well as the iPad. They can be made seamlessly compatible by means of a specially designed application. This app can be downloaded free of cost from the Apple App Store. Furthermore, the Luna Voyager II is capable of accommodating the smartphone, tablet, or the music player, even when they are housed in some of the available protective cases. 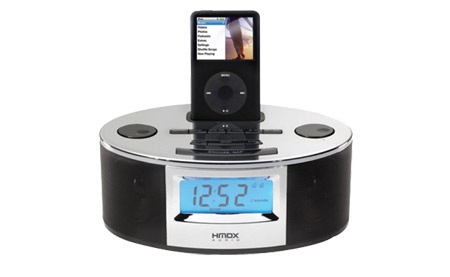 If you are impressed by the Homedics HMDX-C20 and would like to make it a part of your collection, you might want to rush to buy it at soon as you’ve glanced through the entire list of iPod clock radios. Because the last time we checked the company’s official website, we were notified that only three were left, and there is no word on whether more will be made available soon or not. Apart from your regular tracks, this one also gives you choices of waking up or falling asleep to six restful nature sounds. It flaunts a round design and can also be used with other MP3 players via an auxiliary line-in. 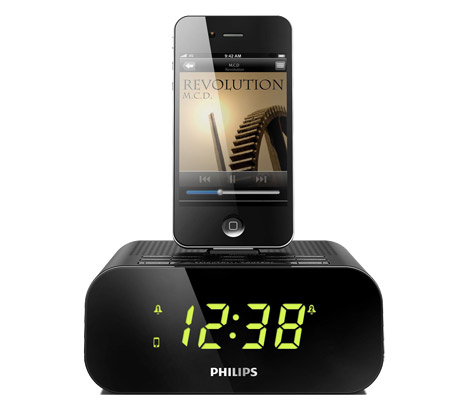 You don’t want to squint in the middle of the night just to check the timing, do you? The fluorescent digital display of the Philips AJ3270D/37 might help with this predicament. Its brightness levels can be adjusted according to your needs. This entrant can also lodge the Apple smartphone or music player while they are wrapped securely in their respective cases. The system has provisions for time and alarm backup so you don’t have to lose sleep in case of power cuts. If you don’t wake up easily or have a partner who arises at a different time, you can set two different alarm timings complete with respective favorite tunes.

Here we conclude our compilation of the best iPod clock radios available in the market right now. But if you think that any particular device which currently has a place of its own by your bed is more preferable, we would surely like to know about it.