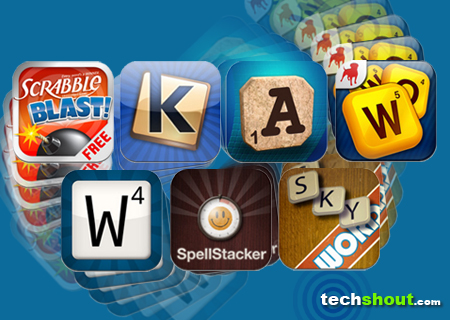 Brainstorm with the best iPhone Scrabble apps. Get your game face on, equip yourself with an Apple handset and embark on a ‘wordy’ adventure. Here, the virtual terrain becomes your game board. You can either dive in solo or play with a friend or family member to see who emerges triumphant. The word wizard crown will go to the one who intelligently uses the provided letters, tiles, words and alphabets. The acme choices listed below are also great stress busters that can be enjoyed anywhere, anytime. 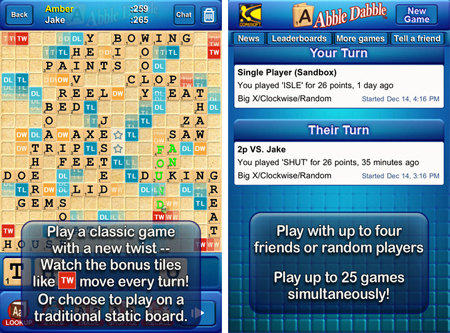 The AbbleDabble app is an amalgamation of crossword games mixed with slices of classic wordplay. Claiming to be like ‘yoga for the mind,’ it allows you to either play on a traditional static board or opt for the one which offers a new twist. If you choose the latter, then get ready to see bonus tiles like TW and others change their place after each turn. 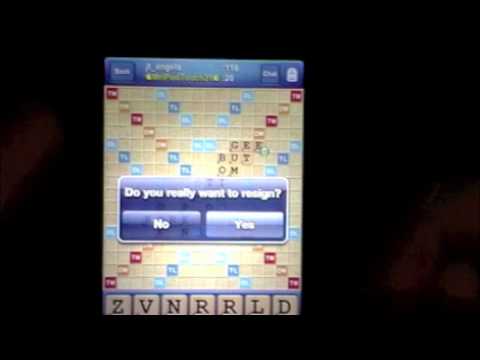 All good words formed across the board will glow with a green light. The worldwide leaderboards track all your high game and word scores, ties, wins and losses. You can play up to 25 games at a time and with up to 4 players. Other features include sandbox mode, balanced tray option and quick lookup for forming 2-letter words. There is also a free version of the title up for grabs in iTunes. 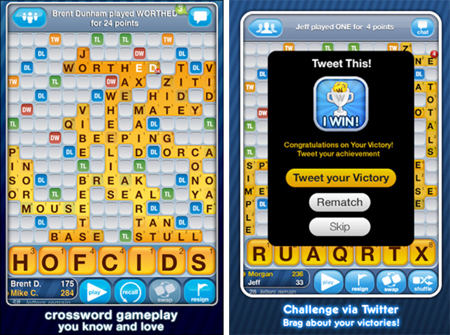 The next entrant in our iPhone Scrabble apps array is a multiplayer puzzle game dubbed Words With Friends. Like AbbleDabble, this delight is also priced at under $3 and lets you challenge friends and random opponents online. But while the aforementioned title allowed just 25 simultaneous games, this particular installment enables you to dabble in up to 20 separate games.

Endowed with a turn-based appearance, it incorporates familiar gameplay elements. This means that all those who are a whiz at Scrabble, will be able to master the game in no time. Social butterflies can even connect to Facebook and find like-minded friends to play with. In-game chat messaging is also made possible for staying in touch with relatives and pals strewn all across the globe. 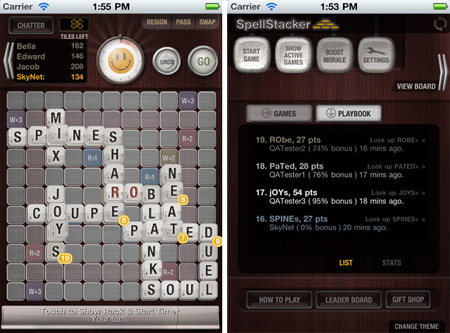 So you think you’re a word game pro? Well, challenge yourself by attempting to beat the established leaderboard scores in the SpellStacker app. The game is fashioned for the portable arena and boasts of including various attributes like solitaire and person-to-person modes. While the former requires you to make smaller words, you will have to create bigger ones in the latter, which have more strategic value. 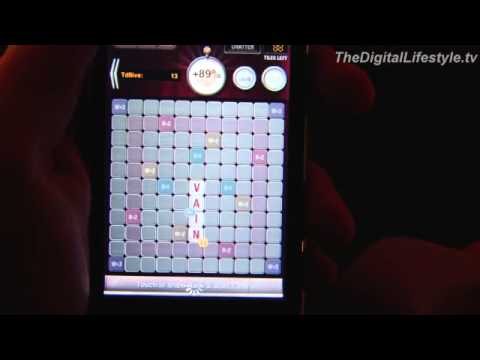 You can also avail of other attributes like up to four player online modes, comprehensive user stats, built-in morale booster, drop down tips and a 3D board. There is even an integrated dictionary for looking up words and expanding your vocabulary. 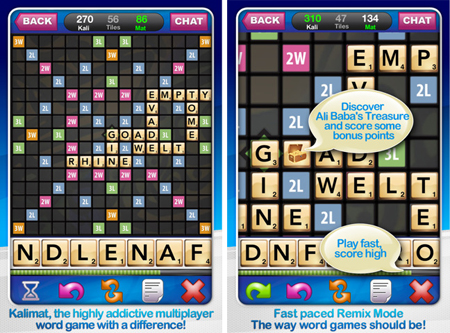 Like majority of our iPhone Scrabble apps, the Kalimat application can also be purchased by shelling out just $2.99. According to the developer, the software caters to both casual as well as serious gamers. And although it comprises of familiar gameplay rules, a set of new ones are also added to the word game concoction. You can play up to 20 games simultaneously with friends plucked from your contacts list or against random opponents. 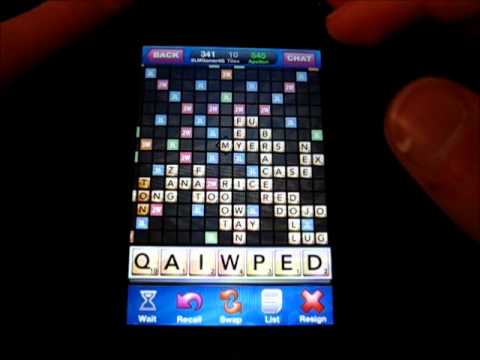 And those who don’t have an internet connection can still get a dose of multiplayer action through local play. Kalimat brings forth 2 game modes namely, Normal and Remix where you’ll be rewarded for playing quickly and unraveling the secrets of Ali Baba’s treasure. Confused whether your string of letters amounts to a legit word? Simply look up the same via the Word List and even acquire its definition. 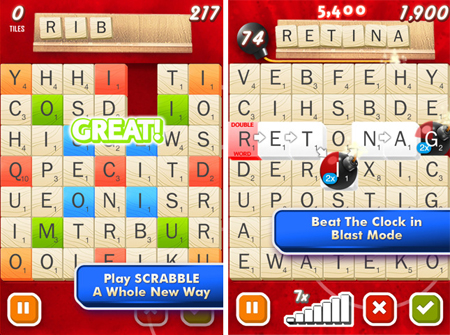 Although it sports the name ‘Scrabble’ in its title, the Scrabble Blast app enables fans to play the well known game in a whole new way. In this fast-paced wordplay puzzler, you have to race against the clock and form words by connecting letters that descend onto the virtual board. There are 2 modes already provided in this free-to-obtain app namely, Blast mode and Puzzle mode. 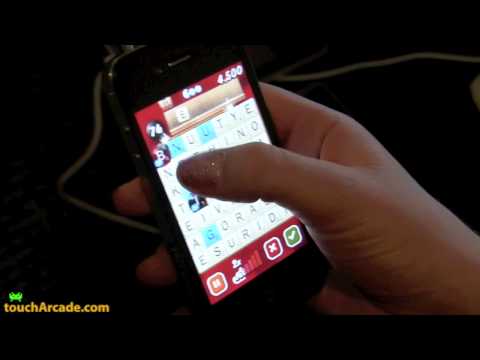 What’s more, if you download the Scrabble Free app, you’ll be able to acquire the Classic and Action modes as well. So now you have 4 modes to keep yourself occupied during those long lectures or boring boardroom meetings. What are you waiting for? Download this entrant and literally ‘have a blast.’ 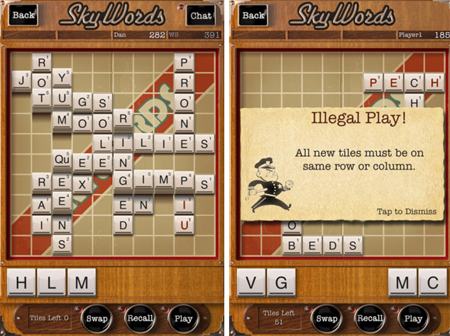 The SkyWords app is noted to be a tile-based game that forays into our iPhone Scrabble apps roster with an interesting twist. As the makers suggest, you can create new words by stacking letters on top of the already present ones. Aim for the sky as you’ll be rewarded with a high score for creating a high stack. You can either indulge in the single player mode or gather up to 4 friends and compete in the ‘pass and play’ mode. Hop online to play with pals or random opponents and even conduct in-game chat messages with them. GameCenter leaderboard and achievements round up the appetizing attributes for SkyWords. 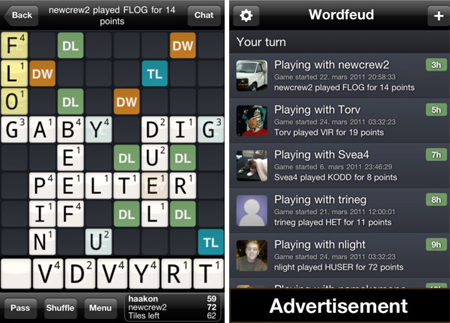 The multiplayer puzzle game, Wordfeud enables you to challenge friends as well as random opponents on the online space. They can enjoy up to 30 separate games at one time. There is a 15 x 15 tile board scattered with high scoring double and triple word and letter tiles to avail of.

The makers have thrown in the option of randomizing the board for jumbling up the special tiles. You can also chat with your challenger while engaging in gameplay. The software further utilizes dictionaries penned down in languages like English, French, Norwegian, Danish, Spanish, Dutch and Swedish.

Have you picked your favorite title from among our best iPhone Scrabble apps lineup? Why not give them all a whirl and tell us what you think in the comment box below.