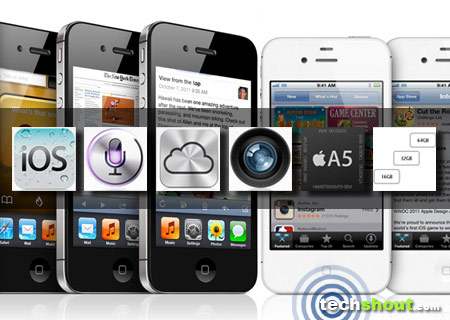 Here we have compiled our list of iPhone 4S features for your consideration. Apple managed to put those wagging tongues to rest for the briefest period ever – between launching the iPhone 4S and most of the world waking up to realize it was finally out. Now we’re back to talking about how the new iPhone is unfortunately not radically different from the old and how Apple didn’t even bother doing anything about the overall design. If you’re among the clan of people wondering if Apple’s next generation smartphone is worth buying or not, here are the iPhone 4S features for you to mull over.

1. Siri: Not creeped out by the idea of having a conversation with your phone? The Siri application can apparently not just hear what you’re asking, but also comprehend it intelligently. So if you say ‘Any good burger joints around here?’, the utility should reply along the lines of ‘I found a number of burger restaurants near you.’ Hit back with a ‘How about tacos?’ and Siri will remember the context of your previous query and look for Mexican eateries in the area. If that isn’t eerie enough, the software is supposedly built to keep questioning you till it finds what you were searching for.

2. 8MP camera: Those who’ve been moaning about cameras on iDevices not being up to scratch as compared to smartphones in its league can give it break. Apple’s finally upped the megapixels on this one and fitted it with an 8MP camera. The snapper is supported by AF, tap to focus, face detection in stills and LED flash. As for videos, it is capable of capturing 1,080p HD clips at up to 30fps. The backside illumination sensor has been coddled with more attention and the custom lens proudly boasts of a large f/2.4 aperture now. Place this against the 5MP AF camera on the iPhone 4 which could only shoot at up to 720p resolutions, if you please.

3. A5 chip: Taking the processing muscle up by a notch, the iPhone 4S embeds a 1GHz dual core A5 chip. And Apple wants you to take their word for it when they say that the CPU drives graphics up to seven times quicker. More processing power should also mean a zippier iPhone whether it’s for web browsing or mobile gaming. Feel free to call it the ‘most powerful iPhone processor ever’, Apple. It’s not like you’ve got an A6 in hand as yet. Not that the company would claim otherwise, but the A5 is engineered to be noticeably energy efficient and work with iOS 5 to deliver a battery life which can sit through up to 8 hours of 3G talk time.

4. Up to 64GB storage: Among the things you couldn’t separate from the iPhone apart from the battery cover and snobbish appeal, is the memory capacity. The lack of a microSD card slot for expanding the hoarding space may have troubled at least a handful of users. The developer folks at Cupertino have changed their minds about the maximum amount of storage you’d need as an iPhone 4S user. The 32GB memory cap has been raised to 64GB. So now you can grab the next generation iPhone with 16GB, 32GB or 64GB of memory. And if it was a smaller capacity iPhone you were hankering after for whatever odd reason, you’ll have to make do with an 8GB iPhone 4.

iOS 5 and iCloud: We know, iOS 5 and iCloud shouldn’t exactly show up on a outstanding 4S features list owing to the fact that they aren’t characteristic of the iPhone 4S. But it’s great that you don’t have to be tethered to a cable any more for syncing or backing up content on your iDevices with iCloud. As for iOS 5, it is claimed to bring in around 200 new features. There’s a fresh Notifications Center, ‘BBMish’ iMessage and deep integration of Twitter to start with.

Still not convinced about counting out the crisps for a new iPhone 4S? You’ve probably missed out on our first candidate in this iPhone 4S features list.

16 Best Low Storage Games For Android and iOS That Take...

10 Must Have Android Apps