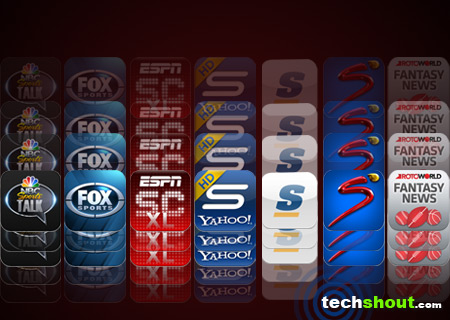 The best iPad sports apps dribble their way across the tablet to satisfy every fan’s deepest desires. These delights are here to splash fresh content across the device’s 9.7-inch screen. From the latest match scores to live play-by-play updates, our compilation of the acme applications covers all these aspects and then some. So put on your favorite team’s jersey and arm yourself with the Apple slate as we’re sure you would want to download a few of our picks almost immediately. 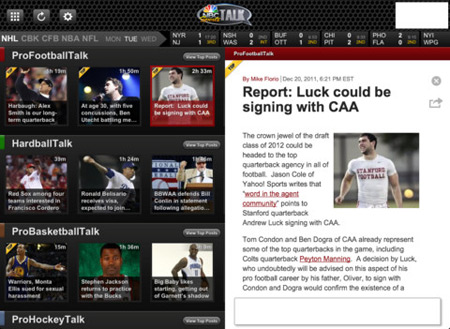 Looking for the latest news, analysis and rumors that are doing their rounds in the sports scenario? Well, in that case, we suggest you throw a glance at the NBC Sports Talk app. What’s more, all the juicy details pertaining to your favorite game and sportsperson can be found neatly packaged into one user-friendly app. Instead of laying out boring, in-your-face content, sports data is offered in an entertaining manner via various Talk platforms. These include ProFootballTalk, ProHockeyTalk, GolfTalkCentral, CollegeFootballTalk, Inside the Irish, ProBasketballTalk, HardballTalk, ProSoccerTalk and CollegeBasketballTalk. Furthermore, you can gain access to information while away from the internet or Wi-Fi connection. The software also enables you to share articles with friends and family through social networking websites like Twitter and Facebook. 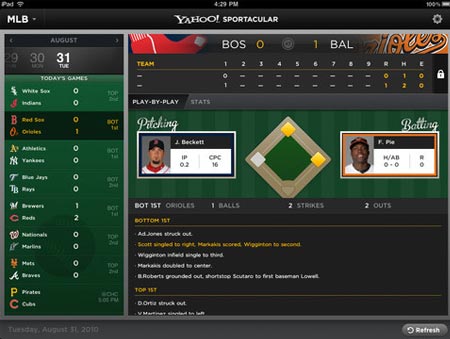 Entering next into our list of iPad sports apps is the Yahoo! Sportacular HD application. Touted by the makers to be ‘your game day couch companion,’ it allows you to seamlessly follow games, acquire TV programming information and check out stats as well as start times. All this can be done with just a few taps of the Apple tablet. You can get the latest insights about your favorite leagues and teams which include the likes of the NFL, NBA, NHL, MLB and all five PGA Tours namely PGA, PGA Champions, PGA European, LPGA and PGA Nationwide. College football and basketball fans surely won’t be disappointed as the app covers these events as well. 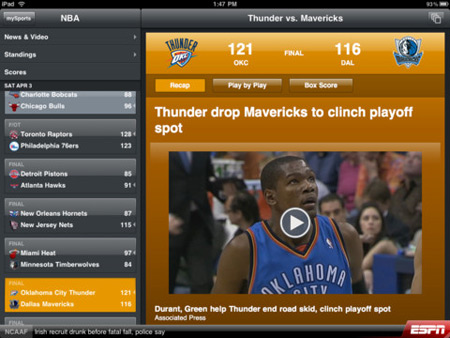 Owning an iPad means getting your hands on the ‘bigger picture.’ And what better way to exploit this factor than by downloading the ESPN ScoreCenter XL app. Optimized specially for the Apple tab, it includes loads of premium attributes such as video highlights, live statistics, full game previews and recaps, live play-by-play action, complete standings , full box scores and scoring summaries.

Other features read as top events, myTeams and push scoring alerts. The latter covers actual game start and final alerts as well as scoring plays and ends of period alerts complete with top performer statistics. Besides just satiating the appetite of NBA, NHL, MLB and NFL fans, the application also dishes out information pertaining to other sports like tennis, golf, cricket and rugby. 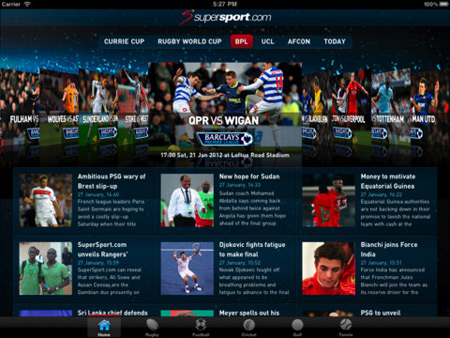 With the SuperSport.com for iPad, plucked right out from our iPad sports apps array, you can expect to be doused with ‘the ultimate second screen experience,’ according to the developers of the software. Real time match updates, commentary, video highlights and more are ported directly to your fingertips. Adding to this engaging list is the live in-game match chat feature which enables like-minded individuals to interact with each other. It also includes player profiles, latest results and match stats. However, only football and rugby games are presently covered by the app. But don’t fret just yet, as other sports events are apparently in the pipeline and would arrive shortly to your portable space. So stay tuned. 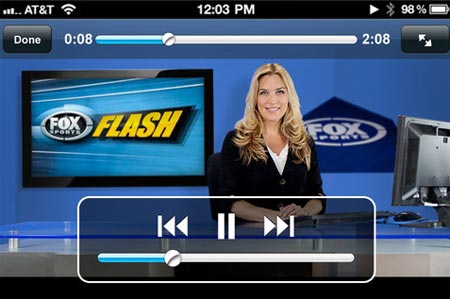 With the Fox Sports Mobile app stored in your slate, you will be able to acquire the latest buzz surrounding your desired teams and sports. Comprehensive news and exclusive analysis on the games are compiled by the Fox Sports team, which comprises of on-air personalities and writers. Although pictures speak a thousand words, its video clips that seem to bring the spirit of the game to life. And exploiting this particular factor are various inclusions like the hourly ‘Fox Flash’ update, pre- and post-game interviews and the ‘Lunch With Benefits’ series. Some of the sports events covered by the application read as MLB baseball, NFL and NCAA football, NBA, WNBA and NCAA basketball, NASCAR, tennis, NHL hockey, golf, MMA and boxing, motorsports and soccer. Did we mention the presence of the Fox Sports Radio which enables you to ‘listen while you surf?’ 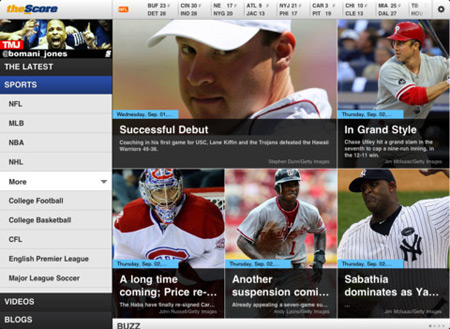 The theScore iPad edition application forays into our iPad sports apps roster bringing along news standings, box scores and player stats for games like NBA, NHL, MLB, NFL, college football, MLS, CFL, UEFA, college basketball and much more. Watch out for ‘original digital’ video news shows that are updated on a daily basis like The Basketball Jones, The Break, The Morning Jones, Branded and Cabbie on the Street. If that’s not enough, you can also spy informative blogs such as Goal Line Stand, The Footy Blog and Hockey or Die which shed light on the NFL, soccer and NHL games, respectively. 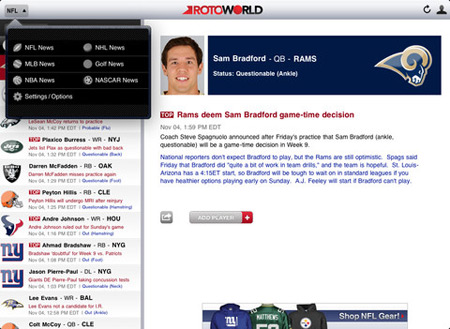 Our list wouldn’t really be complete without the mention of a software option that offers the best fantasy sports news out there. The Rotoworld Fantasy News application fits the bill just right as it provides sports enthusiasts with all the latest fantasy news in various fields such as MLB, NHL, NFL, NBA, NASCAR and golf. Besides player news bits, you can also expect in-depth analysis and injury reports. Through the inclusion of Watch Lists, fans can follow their favorite players without missing out on any vital information. Want to get the latest scoop on players like Sam Bradford, LeSean McCoy and Hakeem Nicks? All you need to do is punch in the desired name and you’ll be endowed with all the information stats on the same.

Besides offering loads of individual features, each of the best iPad sports apps etched in our lineup can be taken advantage of without having to shell out even a dime. Do let us know which ones got a ‘thumbs up’ from you. Also leave in a comment or two about your favorite picks from the iTunes library.