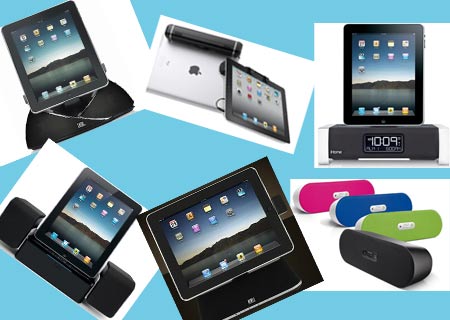 Here we have compiled our list of the best iPad speakers for music enthusiasts. Music is all around, in different tunes and sounds. Through the means of radio, headphones or even some lucky lips, we hear soothing noises that sparkle sightlessly enough to calm our souls. Well, to know just how strong melodic waves really are, just ask the Pied Piper who mesmerized rats and children with his music. In this day and age, with technology advancing at a quick pace, fairy tales too seem to have an electronic edge. Listed below are the choicest iPad speakers for providing owners with beautiful, crisp sounds.

The company reveals that by employing the Octiv Stage MP450 with the iPad, music aficionados can expect powerful, crystal clear audio. Besides that, the device also multitasks as a charger to the iPad while it’s safely docked in its cradle which offers the option of portrait or landscape orientation as per users’ preference. 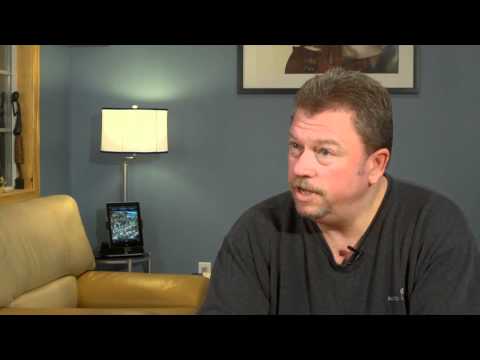 They can even gain easy access to the volume control and power on/off options. Furthermore, Altec Lansing provides a convenient full-featured remote control for some ‘easy’ laidback listening. The enticing offering can be purchased at $129.99. 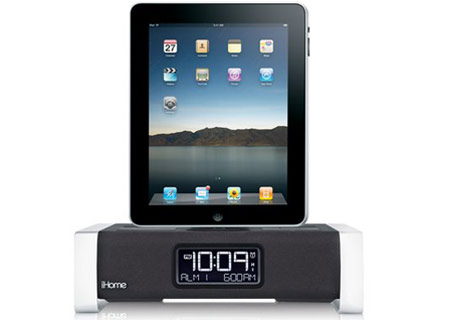 The next addition to our iPad speakers list is something that claims to be a first of sorts, the entertainment docking product boasts of incorporating Bluetooth capability, alarm and iHome +Sleep app-enhanced functionality like sleep stats and social notifications all in one device. Multitasking at its best, the system can be used as an FM radio and speakerphone and it even has the ability to stream music wirelessly.

The device is also seen as a portal to the owner’s internet radio station needs via the iHome+Radio app. Other features include four active speaker drivers in Reson8 chambers that deliver 20 watts RMS and a line-in jack for attaching other gadgets as well. The iHome iA100 bears a price tag of $199.95. 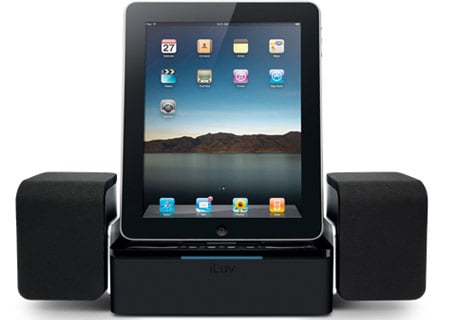 This hi-fidelity speaker dock is carved not only to exuberate great sound while attached to the iPad but also to echo with brilliance when paired with other Apple products such as the iPod and iPhone. Known as the desktop or bedside speaker dock, owners can easily enjoy movies, videos, apps and games in all their glory while docked. Sound clarity is further enhanced thanks to the inclusion of dynamic acoustic speaker chambers along with powerful amplifiers. Other attributes come in the form of an auxiliary line input for 3.5mm jack devices. There is also a flexible dock connector for better accommodation. iLuv introduces the speaker dock at a price of $129.99. 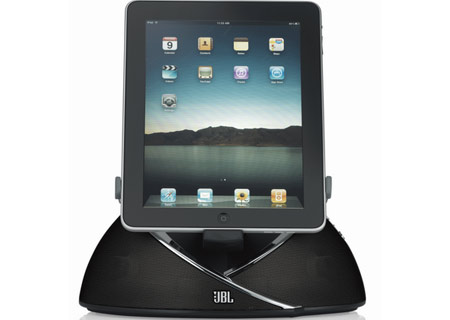 As far as sparkling speakers are concerned, JBL cannot be left far behind. The dock is claimed to be the premier offering from the company’s nest to feature high-output sound when paired with not only an iPad but also any iPhone or iPod. With the inclusion of a universal connector, the Apple gadgets can be rotated to either landscape or portrait orientation depending on the desired display. 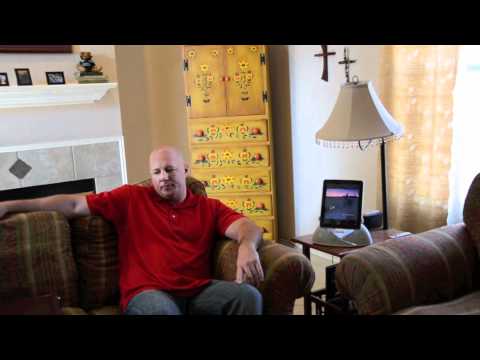 As the company suggests, the docking station boasts of dual Phoenix full-range transducers complete with computer-optimized DSP equalization. Music navigation and system functions can all be operated through the IR remote. Integrated Wi-Fi networking allows connection to any 802.11b/g network which covers WPA protected networks as well. The JBL OnBeat loudspeaker dock can be picked up for a price label of £149.99. 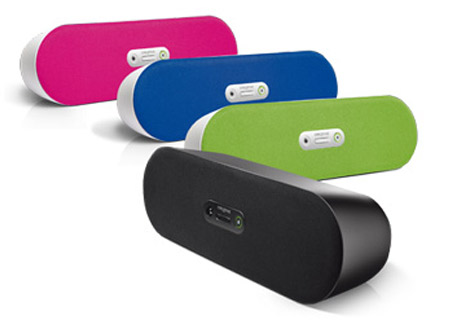 Moving from classic black-, white- and gray-doused devices, we add the Creative D80 wireless speaker which drenches the array with a dollop of vibrant colors. Pink, green and blue are the choice of hues offered to music lovers. iPad owners with a fetish for the black shade need not fret as this offering can also be procured in noir. Shifting away from color to specifications, the wireless one-piece portable speaker includes a pair of 3-inch full range drivers for dynamic audio as well as built-in aux-in for connecting other audio options. Apart from the iPad, the speaker can also be paired with iPhones, Android and BlackBerry phones as well as the Creative Ziio. The company has attached an affordable price of just $49 to the product. 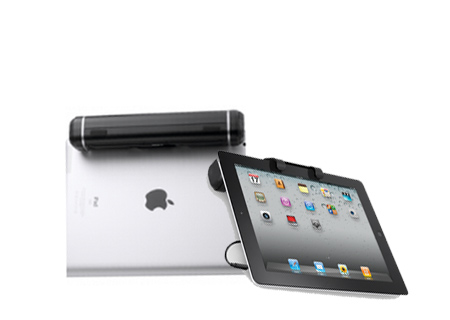 The final inclusion to our iPad speakers compilation is somewhat of the trendy sort as it incorporates an interesting clip-on feature for the iPad or any other tablet that boasts of a 3.5mm audio jack. We are talking about the Logitech Tablet Speaker that forays into our list complete with a rubberized clip for music maniacs on the go.

Boasting of dynamic duo-like qualities, the offering can also be utilized as a display stand for that slight inclination. Encased in a barrel-shaped form factor, the innovative gadget includes two speakers located on either side as well as two indicator lights spied at the top. Claiming to deliver up to 8 hours of battery life, the tablet speaker bears a price of $49.99.

All of the above audio-related treats in our list of the best iPad speakers are fashioned to give Apple iPad owners a great aural experience whether it’s simply relaxing at home with the feet kicked up or while traveling.